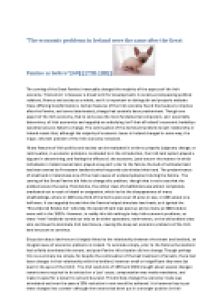 The economic problems in Ireland were the same after the Great Famine as before In light of this comment, evaluate and assess the Irish economic situation prior to and after the Famine.

﻿?The economic problems in Ireland were the same after the Great Famine as before? [60] (1798-1882) The coming of the Great Famine irrevocably changed the majority of the aspects of the Irish economy. ?Economics? is however a broad term for developments in society encompassing political relations, finance and society as a whole, and it is important to distinguish and properly evaluate these differing transformations. Certain features of the Irish economy found themselves to improve after the Famine, and some deteriorated; change had certainly been predominant. Though one aspect of the Irish economy, that to some was the most fundamental component, and essentially determiner, of Irish economics and arguably an underlying ?evil? that all Ireland?s economic hardships swivelled around, failed to change. The continuation of the dominant landlord-tenant relationship in Ireland meant that, although the majority of economic issues in Ireland changed in some way, the major, inherent problem of the Irish economy remained. Many features of Irish politics and society can be evaluated in order to properly judge any change, or continuation, in economic problems. As alluded to in the introduction, the Irish land system played a big part in determining, and feeling the effects of, the economy. ...read more.

The Irish Land Acts of 1870 and 1881 brought about several changes: tenants were required to be evicted on a ?just? cause, compensation was made mandatory, and made it easier for a tenant to sell and buy land. This did help change the economy: trade was stimulated and over the years a 20% reduction in rent would be achieved. It is however key to put these changes into context- although the tenants had been put in a stronger position in their relationship with the landlords; it served as no real cure for the economic ills of Ireland. It did not impact at all on Irish economic growth due to the fact that, the source of the problem hadn?t been the tenant-landlord relationship, but the shortage of cultivable land. Perhaps what best epitomises the lack of significant change and continuation of the domination of the landlord post-Famine is the fact that in 1879 1000 families were turned off their land. It is, after all, unlikely that the clamour of the tenant right movement, and then the land league would have arisen had the landlord-tenant relationship changed in any way. ...read more.

All points taken into account, it is undeniable that the Irish economy had changed in some degree after the Great Famine (some aspects for better and some for worse), the real question is to what extent this change was significant. The individual fortune of Irish farmers, and Ireland on the whole, did increase owing to the fall in population- the incomes of farmers increased and industrial development in Ireland allowed for improvements in education and trade. However there are certain restraints to these ?changes?- for instance, agriculture continued to preside over industry, and a serious shortage of cultivable land remained. However the fundamental cause of economic problems in Ireland- land tenure and the relationship between landlords and tenants- failed to see any real transformation. This can best be epitomised by the occurrence of the agricultural depression of the 1870?s, and exploring its causes. It is perhaps the report of the Royal Devon Commission that best summates the Irish situation in the nineteenth century- ?the source of all Ireland?s misfortunes and poverty was the fatal system of land tenure existing in the country?. Ireland?s failure to prevent the continuation of the landlords? dominance over the tenants meant that the inherent component of Irish economic problems, or crucially causer of these Irish misfortunes, would remain. Thomas Smith ...read more.