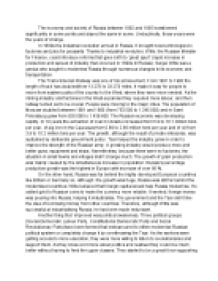 The economy and society of Russia between 1882 and 1905 transformed significantly in some points and stayed the same in some.

﻿The economy and society of Russia between 1882 and 1905 transformed significantly in some points and stayed the same in some. Undoubtedly, those years were the years of change. In 1880s the industrial revolution arrived in Russia. It brought new technologies to factories and jobs for peasants. Thanks to industrial revolution, Witte, the Russian Minister for Finance, could introduce reforms that gave birth to ?great spurt? (rapid increase in production and spread of industry that occurred in 1890s in Russia). Sergei Witte was a genius who sought to modernise Russia through numerous changes in its economy and transportation. The Trans-Siberian Railway was one of his achievement. From 1881 to 1900 the length of track has doubled(from 13.270 to 33.270 miles. ...read more.

A growing industry would produce more and better guns, equipment and ships. Nevertheless, because there were no factories, the situation in small towns and villages didn?t change much. The growth of grain production was mainly caused by the simultaneous increase in population. Russia?s percentage production growth was the highest in Europe with increase of over 95 %. On the other hand, Russia was far behind the highly developed European countries like Britain or Germany so, although the growth was huge, Russia was still far behind the modernised countries. Witte believed that foreign capital would help Russia modernise. He added gold to Russian coins to make the currency more reliable. It worked, foreign money was pouring into Russia, helping it industrialise. ...read more.

he could be sent to Siberia or go to a political prison. The thing that didn?t change at all was political system. The peasants were still working for the benefit of aristocracy and most of them didn?t see any alternative to that. They weren?t politically aware and could be manipulated easily as the only thing they wanted was land. Anyway, Tsar was the authoritative ruler and he could do everything he pleased. All things considered, the economy and society of Russia has been transformed to a great extent. Although there were both: things that stayed the same and things that changed a lot, it was a good beginning of a huge change that was to come. Without the little changes between 1882 and 1905 Russia wouldn?t be able to transform, so it can be said that they were as important as the transformation itself. ...read more.