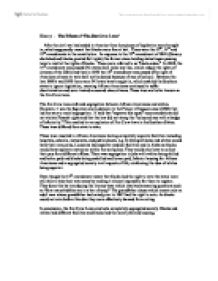 The effect of the Jim Crow Laws

History - The Effects of 'The Jim Crow Laws' After the civil war had ended in America three key pieces of legislation were brought in, which supposedly meant that blacks were free at last. These were the 13th, 14th and 15th amendments to the constitution. In response to the 13th amendment of 1865 (Slavery abolished and blacks granted full rights) the former slave-holding states began passing laws to restrict the rights of blacks. These were referred to as "black codes." In 1868, the 14th amendment was passed (No states shall make any law, which reduce the rights of citizens of the USA) ...read more.

These laws are better known as the Jim Crow laws. The Jim Crow laws enforced segregation between African Americans and whites. However, it was the Supreme courts decision in the Plessy v Ferguson case (1896) that led the way to racial segregation. It held that "separate but equal" accommodations did not violate Plessy's rights and that the law did not stamp the "coloured race with a badge of inferiority." This resulted in an explosion of Jim Crow laws in the Southern States. These laws differed from state to state. ...read more.

Even though the 15th amendment meant that blacks had the right to vote the states were still able to take their vote away by making it almost impossible for them to register. They done this by introducing the literacy tests which involved answering questions such as 'How many bubbles are in a bar of soap?' The grandfather clause which meant only an adult man whose grandfather had voted prior to 1867 had the right to vote. As blacks could not vote before this date they were effectively banned from voting. In conclusion, the Jim Crow Laws created a completely segregated society. Blacks and whites had different facilities and blacks had the worst jobs and housing. ?? ?? ?? ?? ...read more.