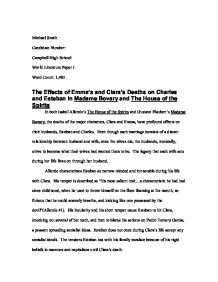 The Effects of Emma&amp;#146;s and Clara&amp;#146;s Deaths on Charles and Esteban in Madame Bovary and The House of the Spirits

Michael Smith Candidate Number: Campbell High School World Literature Paper 1 Word Count: 1,485 The Effects of Emma's and Clara's Deaths on Charles and Esteban in Madame Bovary and The House of the Spirits In both Isabel Allende's The House of the Spirits and Gustave Flaubert's Madame Bovary, the deaths of the major characters, Clara and Emma, have profound effects on their husbands, Esteban and Charles. Even though each marriage consists of a distant relationship between husband and wife, once the wives die, the husbands, ironically, strive to become what their wives had wanted them to be. The legacy that each wife sets during her life lives on through her husband. Allende characterizes Esteban as narrow-minded and intractable during his life with Clara. His temper is described as "his most salient trait...a characteristic he had had since childhood, when he used to throw himself on the floor foaming at the mouth, so furious that he could scarcely breathe, and kicking like one possessed by the devil"(Allende 41). His insularity and his short temper cause Esteban to hit Clara, knocking out several of her teeth, and then to blame his actions on Pedro Tercero Garcia, a peasant spreading socialist ideas. ...read more.

Throughout the novel Emma grows increasingly distant from Charles. His inability to see Emma's desire to be romantic keeps Charles out of her world. However, unlike Esteban, Charles is never aware of her unhappiness until Emma dies, explaining his quicker change after her death. Forced to face the reality of their wives' deaths, Charles and Esteban begin to change. The impact that the wives had on their husbands while they were alive is mirrored in the reactions to their deaths. Upon Emma's death "Charles flung himself upon her, crying"(Flaubert 238), and afterward he was "weaker than a child"(Flaubert 238). In memory of Emma "Charles decided in favor of a mausoleum, whose two principal sides were to be decorated with 'a spirit bearing an extinguished torch'"(Flaubert 253). Esteban parallels Charles in his actions. After Clara's death he, like Charles, tries to be close to her once more: "The night she died I locked myself in the room with her"(Allende 292). Furthermore, he wears mourning attire for the rest of his life, as Charles similarly mourned for Emma the rest of his life. Esteban buys a grand memorial, like Emma's, for Clara: "the most fitting, most luxurious mausoleum in the world. ...read more.

One of the most telling aspects of each of the men's changes is their progeny. Their daughter and granddaughter show the type of fathers they are. Berthe must work in a cotton-mill to earn a living because of Charles's money problems after Emma dies. She will live her life in oblivion, as her mother died. Alba's fate is different from Berthe's. Alba turns out to have a bright future because of the help Esteban provides being a role model and getting her out of imprisonment. Alba goes on to write the legacy of her family giving hope to the future as her mother did. Each author structures his novel to reflect his theme. Flaubert places Emma's death scene at the end of the novel. His graphic depiction is the foolish culmination of all her romantic ideals. In the two final chapters, Flaubert shows the quick demise of Charles and the bleak future of Berthe and the impossibility of trying to break the confines of reality through romantic aspirations. Allende, however, places the death scene in the middle of the novel showing instead the lasting effects of Clara's love on those around her. The reader sees Esteban's transformation, Alba's strength and reliability, and most importantly, the idea that love is a more powerful enduring force than hatred. ...read more.