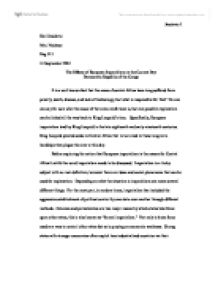 Karl Jasulavic Mrs. Neuhaus Eng 111 14 September 2004 The Effects of European Imperialism on the Current Day Democratic Republic of the Congo It is a well known fact that the areas of central Africa have long suffered from poverty, death, disease, and lack of technology, but what is responsible for this? No one can say for sure what the cause of the areas misfortune is, but one possible explanation can be linked all the way back to King Leopold's time. Specifically, European imperialism lead by King Leopold in the late eighteenth and early nineteenth centuries. King Leopold planted seeds in Central Africa that in turn lead to these long-term hardships that plague the area to this day. Before exploring the notion that European imperialism is the reason for Central Africa's strife the word imperialism needs to be discussed. Imperialism is a tricky subject with no real definition; however there are ideas and social phenomena that can be used for explanation. Depending on what the situation is imperialism can mean several different things. For the most part, in modern times, imperialism has included the aggressive establishment of political control by one state over another through different methods. Colonies and protectorates are two major means by which states take force upon other states, this is also known as "formal imperialism." ...read more.

Though he never actually visits the Congo he commanded a tight grip on things ruling through decree from Belgium. Ivory and rubber were two of Leopold's major resources. He would allow private companies concession to harvest rubber, ivory and other materials from his land, but generally would charge them at least fifty percent of their profits. Kurtz from The Heart of Darkness can be seen as a parallel to King Leopold in this manner. The ivory trade was a greed fueled industry that was violent and dangerous. Kurtz as well as King Leopold were both money hungry Ivory hoarders that would allow nothing to stand in between them and their ivory. Kurtz even threatened to kill a man one time over only a small amount of ivory that is how much the ivory trade meant to them. The more ivory, the more money: the more money, the more desire to harvest more ivory to attain more money. During this time of immense profit and wealth King Leopold became increasing large in size and spent his fortunes on extravagant goods such as fancy yachts, mistresses, art collections, lavish get-a-ways, and the list goes on. The Congo made King Leopold the largest land owner on the planet and also the most notorious. ...read more.

This is especially where I feel Conrad drew a parallel between Kurtz and King Leopold. Conrad being present in the Congo during the time of Leopold's rule, saw the terrible conditions of imperialism and colonization that were taking place in the region. Kurtz' character was a perfect means to display the corruption of the government and the people in charge and bring to light these hardships of the people. Kurtz, as Leopold, was a harsh and unforgiving man that ruled over the ivory trade as Leopold ruled over the country, people feared him as they did Leopold, they had no mercy. Conrad may have used Kurtz in conjunction with Marlow to expose King Leopold as a monster and the company as the bad guy that corrupts Kurtz. This is the reason for the areas misfortune, years and years of persecution with no where to run and no one to help. Recently, a new found freedom has lead to only more problems. "For the Congolese people, independence has meant tyranny, corruption, police-brutality, hunger, malnutrition, and even a shorter life expectancy. That a people should suffer so terribly for so long is truly tragic" (Edgerton). Hopefully one day The Democratic Republic of The Congo can crawl out from the giant boulder that the Europeans threw on them and rise from the ashes to one day have a peaceful state. Jasulavic 1 ...read more.