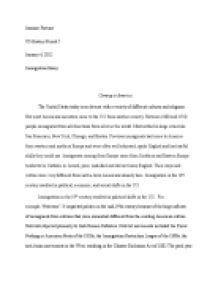 The effects of immigration into the US in the 19th Century.

﻿Jasmine Fortune US History Period 5 January 4, 2012 Immigration Essay Coming to America The United States today is so diverse with a variety of different cultures and religions. But most Americans ancestors came to the U.S from another country. Between 1880 and 1920 people immigrated from all directions from all over the world. Most settled in large cities like San Francisco, New York, Chicago, and Boston. Previous immigrants had come to America from western and northern Europe and were often well educated, spoke English and had useful skills they could use. Immigrants coming from Europe came from Southern and Eastern Europe tended to be Catholic or Jewish, poor, unskilled and did not know English. Their ways and culture were very different from native-born Americans already here. Immigration in the 19th century resulted in political, economic, and social shifts in the U.S. ...read more.

The Immigration Act of 1924 created a quota system that restricted entry to 2 percent of the total number of people of each nationality in America as of the 1890 national census. This system favored immigrants from Western Europe-but unfortunately prohibited immigrants from Asia. So no one from Asia was allowed to enter the U.S. Immigration in the 19th century resulted in economic shifts in the U.S. With many lands being available in the U.S there was a strong demand for workers. The Expansion in the west became the gold mine of the 19th century. For this very reason that thousands of individuals, both internal and international begins to settled in the west in search of a better opportunity. Therefore, politicians had to formulate many laws that pertained to the welfare of the newcomers, and also to control the massive numbers of immigrants that were crossing the US border. ...read more.

Immigration in the 19th century resulted in social shifts in the U.S. During the developmental era, they were a major gap between rich and poor. Due to these social changes, many individuals who once use to associate with their neighbors began to distance themselves. For example, professionals, storekeepers, clerks, office workers, and supervisors begin to only intermingle with individuals' within their social status. They did not socialize with others outside their social circle, and people with whom they shared common ground with. America was viewed as the ?golden door? to opportunity, a hope of a better life. The many different cultures of people immigrated to America changed the U.S. from new culture and religion which causes some issues as for the people already in America. Immigration resulted in political, economic, and social shifts in the United States. But in the end, without all the immigration the U.S wouldn?t be what it is today, and have the diversity that it does. ...read more.