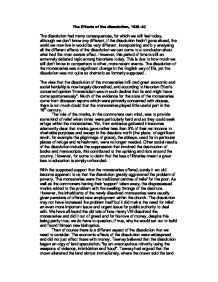 The Effects of the Dissolution of the Monastries

The Effects of the dissolution, 1536-40 The dissolution had many consequences, for which we still feel today, although we don't know any different, if the dissolution hadn't gone ahead, the world we now live in would be very different. Incorporating and by analysing all the different effects of the dissolution we can come to a conclusion about what had the most severe effect. However, this period of time is still an extremely debated topic among historians today. This is due to how much we still don't know in comparison to other, more recent events. The dissolution of the monasteries was a significant change in the English way of life, yet the dissolution was not quite so dramatic as formerly supposed. The view that the dissolution of the monasteries inflicted great economic and social hardship is now largely discredited, and according to historian Elton's concerted opinion "monasticism was in such decline that its end might have come spontaneously". ...read more.

The effects on how the people viewed Henry changed quite dramatically because of the dissolution. They now considered him greedy, a trait you really don't want to have being King and leader of a country. The people, who had bought the land, now had political influence in their localities. Yet this is not one of the major effects of the dissolution. Considering these reasons, I can conclude that it was not the financial impact the dissolution had, but actually in the long-run it was the cultural upheaval that caused so much discontent and anguish among the commoners, and therefore the most significant effect among society. The people of the day did not like change; they liked the way things were, and for a King to change and revolutionise their surroundings (such as the church they believed in, and the routine of everyday life) it can be accurate to say this is what caused the biggest impact. ...read more.