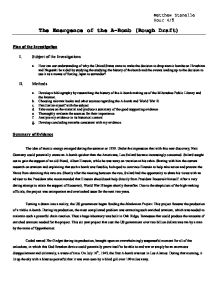 The Emergence of the A-Bomb

Matthew Stanelle Hour 4/5 The Emergence of the A-Bomb (Rough Draft) Plan of the Investigation I. Subject of the Investigations a. How can our understanding of why the United States came to make the decision to drop atomic bombs on Hiroshima and Nagasaki be aided by studying the studying the history of the bomb and the events leading up to the decision to use it as a means of forcing Japan to surrender? II. Methods a. Develop a bibliography by researching the history of the A-bomb making us of the Milwaukee Public Library and the Internet. b. Choosing relevant books and other sources regarding the A-bomb and World War II. c. Familiarize myself with the subject d. Take notes on the material and produce a summary of the good supporting evidence e. Thoroughly evaluate the sources for their importance. f. Analyze my evidence in its historical context g. Develop concluding remarks consistent with my evidence. Summary of Evidence The idea of atomic energy emerged during the summer or 1939. Under the impression that with this new discovery, Nazi Germany could potentially create an A-bomb quicker than the Americans, Leo Szilard became increasingly concerned. Szilard sought out to gain the support of an old friend, Albert Einstein, while he was away on vacation at his cabin. ...read more.

A petition from Szilard (and 69 others) to the President of the United States * All of the viewpoints in which this document is based reflect the consequences of Einstein's letter to Roosevelt. Throughout the development of this new type of weapon, the respective parties involved diligently worked and were driven by the fear that America may be attacked by similar weapons during the war and may potentially be forced to use the same means for retaliation. However, after Germany was defeated, this no longer posed a problem. Thus, the creators were fully aware of its capabilities and were acting upon their moral obligations seeing no need to utilize this horrible gadget. This was their means of conditioning the morality of high-ranked officials, since "the people" were not aware of the inevitable repercussions that would come. The purpose of this petition was to attempt to prevent an unnecessary catastrophe that would be the result of the use of the A-bomb and to maintain the honor and respect; fore they saw it as our moral responsibility as the United States of America. The controversy, which this document arises, has value in the sense that it is merely based on moral consideration and attempted to influence the one person who has the authority to make the decision to use this weapon in war. ...read more.

And that is the main argument of this petition. Despite this petition, General Carl Spaatz gave the official bombing order eight days later. Conclusion Uranium fission discovered in the summer of 1939 allowed the Nazis to stumble on to this technology. It was Leo Szilard who first saw the importance of America and the A-bomb. In an attempt to share something few were aware of, he turned to Einstein for help. Leo Szilard could very well have written the letter sent to Roosevelt, but Einstein took full responsibility for it. That letter started the arms race. Through the course of history and the various events encompassing World War II, this race ended in the American's dropping two atomic bombs on two Japanese cities; Hiroshima and Nagasaki. The samurai residence and the Japanese's loyalty to the Emperor made for a very difficult opponent for the United States and its allies, since they were willing to die for their faith. Therefore, it very well could have required the total annihilation of Japan or simply the use of two atomic bombs to make Japan surrender. It's impossible to beat an army who will fight to the end. Fortunately, it was the Emperor who finally impressed on the people the need to surrender; more particularly the impression he left on his Cabinet members. In conclusion, history as we know it (the consequence of WW II) would not have been possible without the use of those weapons. 1 ...read more.