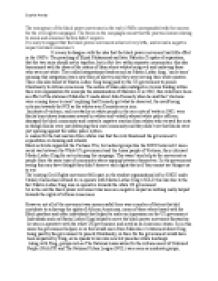 The emergence of the black power movement in the early 1960's corresponded with the success for the civil rights campaigns. The focus on the campaigns meant that the practical issues relating to social and economic factors didnt improve.

﻿Sophie Hendy The emergence of the black power movement in the early 1960's corresponded with the success for the civil rights campaigns. The focus on the campaigns meant that the practical issues relating to social and economic factors didn?t improve. It is easy to suggest that the black power movement achieved very little, and so had a negative impact on black American?s It is easy to disagree with the idea that the black power movement had little effect in the 1960?s. The preaching of Elijah Muhammad and later Malcolm X spoke of separatism, that the two races should not be together, but in fact live within separate communities, this also harmonized with the ideas of the nation of Islam about whites being evil and enslaving those who were not white. They called integrationist leaders such as Martin Luther king, ?uncle toms? meaning that integration was a new form of slavery and they were serving their white masters. There was also belief of Martin Luther King being paid by the US government to preach Christianity to African Americans. ...read more.

So in the end the black power movement was seen as a negative impact as nothing really helped towards the rights of African Americans. However not all of the movement was unsuccessful there was a number of factors that did contribute to achieving the rights of African Americans, many of these where based with the Black panthers and other individuals that helped to make an impression on the US government. Individuals such as Martin Luther King helped to move the black power movement forward as he was co-operative with the white US government, and acted as an American citizen. So in this sense the government helped, or so this would seem from Malcolm x?s statement about King being paid by the government to preach Christianity, so there for the government would have been impacted by King, as he speaks to his own race but preaches white teachings. Along with King, groups such as The National Association for the Advancement of Coloured People (NAACP) ...read more.

The black panthers also made improvements to the movement with the idea of ?patrol the pigs? this involved the panthers using the law against the police when they tried to arrest black citizens, the panthers would question the police and tell the ?criminal? their legal rights, this helped to highlight police abuse towards African Americans and improve their lives. More generally, Black Power offered black people a sense of their own culture and pride in their identity. The late 1960s saw changes in music, fashion and style that celebrated black identity rather than attempting to look like whites, such as the Afro hairstyles, the growth of a new soul music and the later development of hip-hop and rap. It is difficult to measure the results, but it can be argued that by helping to maintain attention on the problems and demanding change, the Black Power movements helped the black communities to keep fighting for better conditions. By comparison with the gains made through ?peaceful? protest, the impact of Black Power was mixed and its achievements limited, but to claim that it achieved nothing for black people is an exaggeration. ...read more.