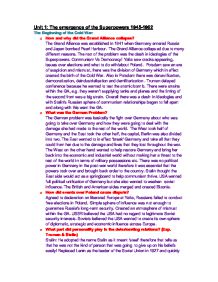 Unit 1: The emergence of the Superpowers 1945-1962 The Beginning of the Cold War: o How and why did the Grand Alliance collapse? The Grand Alliance was established in 1941 when Germany entered Russia and Japan bombed Pearl Harbour. The Grand Alliance collapsed due to many different reasons. The root of the problem was the clash in ideologies of the Superpowers. Communism Vs Democracy! Yalta saw cracks appearing, issues over elections and what to do with/about Poland. Potsdam saw an era of suspicion and mistrust, there was the division of Germany which in affect created the birth of the Cold War. Also in Potsdam there was denavification, democratization, deindustrialisation and demilitarization. Truman delayed conference because he wanted to test the atomic bomb. There were strains within the GA, e.g. they weren't supplying tanks and planes and the timing of the second front was a big strain. Overall there was a clash in ideologies and with Stalin's Russian sphere of communism relationships began to fall apart and along with this went the GA. o What was the German Problem? The German problem was basically the fight over Germany about who was going to take over Germany and how they were going to deal with the damage she had made to the rest of the world. The West took half of Germany and the East took the other half, the capital, Berlin was also divided into two. ...read more.

Disagreement over Greece - civil war between monarchists and Greek communists. International relations would be founded upon the division of each side being suspicious of the other. Marshall Plan would help the USA's economic problem along with reinforcing Truman's idea of containment. American vision was for there to be a stable European market. The Soviets saw the Marshall Plan as a clear example of American economic imperialism. Soviets also thought that their influence made override into the Soviet sphere of influence. Began an acceleration in the division of Europe. July 1947 the USSR walked out of the Paris Conference and the tripartite and established cominform, this was the Soviet response to the Marshall Plan. o Why did the USSR blockade Berlin (June 48 - May 49)? What were the consequences? An economic issue that was the immediate cause of one of the most dangerous crisis'' in Europe since the war ended. The West had created their own currency in their zone of occupation and on the 23rd June they introduced the Deutschmark into West Berlin, by 24th June 48 all road and rail links from the West zones to West Berlin had been blocked by the Soviet Union. British Foreign Secretary Ernest Bevin argued that the Soviet Union's aim was to make Germany all Communist. If the West retreated from Berlin then it would be a success to the Soviets and a step towards communist control over Germany. ...read more.

If they refused to do this then the East would effectively control all access to West Berlin and access would be determined by the DDR. Western powers ignored the Soviet threats, a summit on Berlin was proposed. Khrushchev visited the USA and he and Eisenhower had talks about disarmament and the issue over Berlin. The Berlin wall was built in 1961, with only four main crossing points which were monitored by guards. The wall was a failure by Khrushchev, and a propaganda disaster. Designed to keep East German citizens trapped in a communist state. o How did the atomic bomb affect relations between the superpowers between 1949 and 1962? The USSR was reacting in a predictable fashion; in response to any technological breakthrough by one side there was an urgency to create some degree of balance. If the USA had nuclear weapons then so must the USSR, simple and logical start to nuclear arms race! It was a race to stay on top! August 1949 USSR carried out first tests on its own atomic bomb. Both sides had identical weapons of mass destruction and they both knew the potential scale of destruction that could be caused. NSC-68. The USSR would not hesitate to use nuclear weapons if it was to her advantage. If war between them was deemed to be imminent then the USA was to carry out a pre-emptive strike against USSR. USA must devise anti-nuclear defence systems and nuclear strategic planning would be based on an assessment of the danger. ...read more.