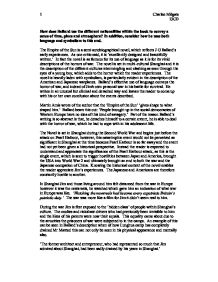 The Empire of the Sun - How does Ballard use the different nationalities within the book to convey a sense of time, place and atmosphere? In addition, consider how he uses both language and symbolism to this end.

How does Ballard use the different nationalities within the book to convey a sense of time, place and atmosphere? In addition, consider how he uses both language and symbolism to this end. The Empire of the Sun is a semi autobiographical novel, which reflects J G Ballard's early experiences. As one critic said, it is 'excellently designed and beautifully written.' In fact the novel is as famous for its use of language as it is for its vivid descriptions of the horrors of war. The novel is set in multi-cultural Shanghai and it is the description of the different cultures intermingling and clashing as seen through the eyes of a young boy, which adds to the horror which the reader experiences. The novel is heavily laden with symbolism, is particularly evident in the description of the American and Japanese warplanes. Ballard's effective use of language conveys the horror of war, and indeed of Jim's own personal war in his battle for survival. He writes in an unusual but clinical and detached way and leaves the reader to come up with his or her own conclusion about the events described. Martin Amis wrote of the author that the 'Empire of the Sun' 'gives shape to what shaped him.' Ballard bears this out: 'People brought up in the social democracies of Western Europe have no idea of this kind of savagery.' Part of the reason Ballard's writing is so abstract is that, he detaches himself to a certain extent, he is able to deal with the horror of war, which he had to cope with in his adolescent life. The Novel is set in Shanghai during the Second World War and begins just before the attack on Pearl Harbour, however, this catastrophic event would not be perceived as significant in Shanghai at the time because Pearl Harbour is so far away and the event had not yet been given a historical perspective. ...read more.

The Japanese warplanes in the novel symbolise strength, which Jim feels he can identify with. The symbolism of the American planes however is much more complex. They symbolise hope that the war is coming to an end. However to Jim this is not necessarily a good thing as he worries that he will lose his stability. 'Do you want the war to end Jim? Dr Ransome often seemed doubtful about this.' 'As long as we stay in Lunghau the Japanese will look after us.' Jim worships all things American but does not want to change the world he has become acclimatised to. He knows that the Japanese are the enemy yet he still wishes to be a Japanese pilot. Jim has a tremendous amount of admiration for the Japanese. He ingratiates himself by being excessively polite whilst in the camp. It is one of Jim's ploys, together with knowledge of all the shortcuts, scams and thieving that he uses to remain alive. He uses his intelligence to survive. Jim is one of the few prisoners in the camp who feels and shows genuine respect towards to Japanese. He is shown kindness by Private Kimura who "often invited Jim to the bungalow he shared with three other guards and allowed him to wear his kendo armour." This kindness can be seen in direct contrast with both the Japanese treatment of the Chinese coolie, who they beat to death. This event is described in a very detailed way but, again, is described in a detached manner and one which indicates that this sort of thing is a regular occurrence: "The Japanese soldiers, Jim knew, would take ten minutes to kill the coolie." Ballard's description of the event makes it seem even more horrific to the reader. Jim identifies the 'strange sing-song that the Chinese made when they were about to be killed.' The Japanese culture and their pilots fascinate Jim. ...read more.

However, they are not. This is evident at the end of the novel where American and British soldiers urinate down the stairs so this shows that they still have no respect for the Chinese coolies, and the Chinese coolies expect this disrespect from them 'their faces expressionless.' Jim finds his parents at the end of the novel this is a hopeful ending as this is something, which Jim has been striving for, for the duration of the novel. The return to Shanghai does not return Jim's life to normal. He has been forced to grow up fast and has different perceptions of this, which he did not notice, before the start of the war. The experience for Jim of being a prisoner of war although horrendous at times has had a positive effect on Jim, he has become more sensitive to the situation of the Chinese Coolies because he has lived like them. The repetition of the floating corpses at the end of the novel is a reminder that, although the war has changed certain aspects of Shanghai and its people, the impoverished funerals for example still continue. Shanghai at the end of the novel has not changed dramatically but it has changed, and is still a 'terrible city.' Critics hold the book in high regards because it is realistic and unlike Ballard's previous science fiction works. I think that the high regard in which the book is held is well deserved. It is 'an immensely powerful novel - in a class of its own for sheer imaginative force.' Ballard's novel is a very powerful one; it gives the reader a realistic portrayal of how people in wartime Shanghai coped. It contains surreal writing that forces the reader to confront the situation, which is being described. The way in which events are seen through the eyes of a child further demonstrates the horror felt by Jim and others in the camp. The book is able to fully engage the reader with its subtlety and the images, which Ballard effortlessly creates. 1 Charlee Milgate 13CD ...read more.