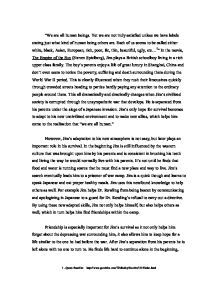 The Empire of the Sun

"We are all human beings. Yet we are not truly satisfied unless we have labels stating just what kind of human being others are. Each of us seems to be called either white, black, Asian, European, rich, poor, fat, thin, beautiful, ugly, etc...1" In the movie, The Empire of the Sun (Steven Spielberg), Jim plays a British schoolboy living in a rich upper class family. The boy's parents enjoy a life of great luxury in Shanghai, China and don't even seem to notice the poverty, suffering and death surrounding them during the World War II period. This is clearly illustrated when they rush their limousines quickly through crowded streets heading to parties hardly paying any attention to the ordinary people around them. This all dramatically and drastically changes when Jim's civilized society is corrupted through the unsympathetic war that develops. He is separated from his parents under the siege of a Japanese invasion. Jim's only hope for survival becomes to adapt to his new uncivilized environment and to make new allies, which helps him come to the realization that "we are all human." ...read more.

After Jim's separation from his parents he is left alone with no one to turn to. He finds life hard to continue alone in the beginning, because of the luxury carefree life he has always lived. Seeking help, Jim eventually finds himself in the arms of Basie, a fast-talking American opportunist determined to make a buck off the spoils of war. Basie never really plays the father figure to Jim, but instead allows him to live in his world for the things he can get in return. Jim never seems to mind Basie's character even after he had tried to sell him; also nearly abandoned him and left him to die at the storage camp, because he feels satisfied just with the fact of not being left alone. This fact also allows Jim to maintain the hope of survival, because he trusts Basie will help get him back to his parents after the war is over. However this hope dramatically extinguishes when Basie's promise of not leaving Jim is broken and Basie silently escapes the camp. This lost hope is clearly symbolized when Jim pitches his suitcase into a lake on his trip to Nantao Stadium. ...read more.

As Jim's character later adapts to the real world he discovers that he cannot do anything he pleases and that we are all just human. Ge discovers this through his special relationship with Kimura when he saves his life and shares the same passion of airplanes as he has. This relationship is suddenly ended when the boy is shot by one of Basie's friends. When Jim cries out: "He was my friend...he gave me a mango", Basie replays: "He was only a Jap". Spielberg does not show the Japanese as cold-hearted individuals, but as human beings like Jim and the rest of the prisoners. The evolution of Jim's character is essentially what keeps him alive. Through adaptation he learns to find new ways to live and help others using his adapted skills. By helping others Jim builds strong friendships; some of which are betrayed and others that are destroyed. Through this long and strenuous journey the one thing Jim has truly learned is that labels- Japanese, British, American, Rich, Poor, have nothing to do with the person you are and that we are all just human. ?? ?? ?? ?? 1 - Quote found in: http://www.geocities.com/Wellesley/Gazebo/3125/misc.html ...read more.