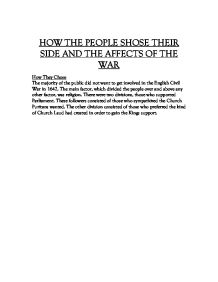 The English Civil War : How the People Chose Their Side and the Affects of the War

HOW THE PEOPLE SHOSE THEIR SIDE AND THE AFFECTS OF THE WAR How They Chose The majority of the public did not want to get involved in the English Civil War in 1642. The main factor, which divided the people over and above any other factor, was religion. There were two divisions, those who supported Parliament. These followers consisted of those who sympathized the Church Puritans wanted. The other division consisted of those who preferred the kind of Church Laud had created in order to gain the Kings support. Most ordinary people had tried not to get involved and stay neutral. If an army came there towards them whatever side it was the villagers obeyed the army and did whatever was ordered till they had gone away. However there was some unfortunate ordinary people who did not have a chance to decide who they wanted to support, this was because if their Landlord supported someone strongly he would then force his tenant to support them as well, however much they obliged. ...read more.

that people end up killing their own flesh and blood, and this fact alone, I think makes it as devastating as any other war in the worlds history. The Affects of the Civil War The affects of this war turned out to huge. The number of casualties which followed were worryingly high, a total of 185,538 people died. 84,738 people of the 185,538 deaths were caused in direct death from combat a further 100,00 died due to indirect deaths (i.e. diseases). Further more deaths were due to Bishop's wars and accidents this made the total rise by another 800 deaths. The English Civil caused a decrease in the population by 3.6%, by comparison to the First World War which was 2.6% and the second which was 0.6% the percentage is very high. This was because the country was fighting against itself this would then mean that more English would die because two armies fighting and getting killed are both English. ...read more.

Once the army had won, everywhere in England he was known as a hero. Still now in the twentieth century some people still agree he is the greatest army leader of all time. Another example of an individual whose status had changed due to the result of the war was Charles 1. Once he had been defeated he was able to be tried and was then found guilty of causing all the bloodshed and misery that recurred in the Civil War. A collapse of censorship took place this allowed public discussion in print. This lifted restriction of the public could be looked at as a popularity stunt by parliament. The affect on trade was also big, as war disrupted trade as markets were cut off. A shortage of money developed when tradesmen and apprentices went to war. However a profit was to be made for the people who made articles for the sides. Overall the affect of the war benefited the Parliamentarians the most due to their importance growing enormously which changed the way England was to be ruled for hundreds years later. ...read more.