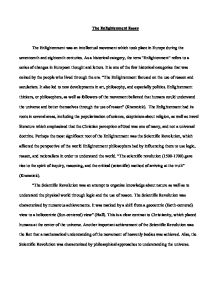 The Enlightenment Essay The Enlightenment was an intellectual movement which took place in Europe during the seventeenth and eighteenth centuries. As a historical category, the term "Enlightenment" refers to a series of changes in European thought and letters. It is one of the few historical categories that was coined by the people who lived through the era. "The Enlightenment focused on the use of reason and secularism. It also led to new developments in art, philosophy, and especially politics. Enlightenment thinkers, or philosophers, as well as followers of the movement believed that humans could understand the universe and better themselves through the use of reason" (Kramnick). The Enlightenment had its roots in several areas, including the popularization of science, skepticism about religion, as well as travel literature which emphasized that the Christian perception of God was one of many, and not a universal doctrine. Perhaps the most significant root of the Enlightenment was the Scientific Revolution, which affected the perspective of the world Enlightenment philosophers had by influencing them to use logic, reason, and rationalism in order to understand the world. "The scientific revolution (1500-1700) gave rise to the spirit of inquiry, reasoning, and the critical (scientific) ...read more.

Galileo's reconstruction of the telescope had him viewing the world differently. He used this instrument to his full advantage to overlook the seas and territories in depth. He took a closer look at the moon the stars, and a few of the planets. With this instrument, he was able to realize that the moon was imperfect and it had holes and craters on it. Then, he was able to find a method to measure their distances apart. The philosophers of the Enlightenment were for the most part French intellectuals. They were writers, professors, and social reformers and they came mainly from the nobility and the middle classes. While many of the philosophers held different viewpoints, they all agreed that philosophy could be the foundation for bettering society just as scientists from the Scientific Revolution agreed that through understanding, humans could improve the world. Additionally, the philosophers were captivated by reason and secularism; the scientists of the Scientific Revolution advocated the use of reason for understanding the physical world and more often than not, their findings contradicted church doctrine. The Enlightenment was a broad and sweeping intellectual movement with many characteristics and implications. The Enlightenment was most notably a decisive break with the Christian worldview. ...read more.

Kant reveals that society expects us never to argue and agree with what we are told. We find restrictions on freedom everywhere and are expected to keep up with these expectations and never argue. This shows how the public's use of reason should be free at all times because it will bring the enlightenment to mankind. Rise of modern science had many consequences. "Went hand in hand with the rise of a new expanding social group-the international scientific community" (Hartford). Members linked together by common interests and shared values as well as by journals and the learned scientific societies founded in many countries in the later 17th century and 18th century. Expansion of knowledge was the primary goal of this community and scientists material and psychological rewards depended on their success in this endeavor. Thus science become quite competitive and even more scientific advance was inevitable. The scientific revolution had few consequences for economic life and the living standards of the masses until the late 18th century at the very earliest.. "True, improvements in the techniques of navigation facilitated overseas trade and helped enrich leading merchants, but science had relatively few practice al economic applications. The close link between theoretical, or p7ure, science and applied technology, which we take for granted today, simply did not exist in any of the world's civilizations before the 19th century" (Hartford). ...read more.