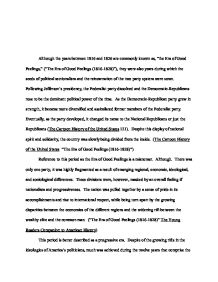 The Era of Good Feelings

Although the years between 1816 and 1826 are commonly known as, "the Era of Good Feelings," ("The Era of Good Feelings (1816-1828)"), they were also years during which the seeds of political sectionalism and the reincarnation of the two party system were sown. Following Jefferson's presidency, the Federalist party dissolved and the Democratic-Republicans rose to be the dominant political power of the time. As the Democratic-Republican party grew in strength, it became more diversified and assimilated former members of the Federalist party. Eventually, as the party developed, it changed its name to the National Republicans or just the Republicans (The Cartoon History of the United States 121). Despite this display of national spirit and solidarity, the country was slowly being divided from the inside. (The Cartoon History of the United States "The Era of Good Feelings (1816-1828)") Reference to this period as the Era of Good Feelings is a misnomer. Although. There was only one party, it was highly fragmented as a result of emerging regional, economic, ideological, and sociological differences. These divisions were, however, masked by an overall feeling if nationalism and progressiveness. The nation was pulled together by a sense of pride in its accomplishments and rise to international respect, while being torn apart by the growing disparities between the economies of the different regions and the widening rift between the wealthy elite and the common man. ("The Era of Good Feelings (1816-1828)" The Young Readers Companion to American History) This period is better described as a progressive era. Despite of the growing rifts in the ideologies of America's politicians, much was achieved during the twelve years that comprise the Era of Good Feelings. This progress, however, upheld the facade of national and political unity. The government of this time did manage to enact new public works acts, gain new territories, the partially de-fortify the American-Canadian Border, and achieve the temporary settlement of the slavery issue. ...read more.

In addition, it was settled that slavery would not be allowed to continue in the territories north of the 36? 30' latitude line ("Missouri Compromise 1820"). This agreement, although well thought out, was not the solution to the slave problem that was hoped for, rather, it perpetuated the dispute between members of the National Republicans and led to a greater sense of sectionalism. ("Alabama" "Missouri Compromise" "Missouri Compromise" "Missouri Compromise 1820") The Missouri Compromise highlighted the differences within the Republican party and was a precursor to a change in American politics. The nation was slowly dividing into two distinct camps, those that favored the southern agrarian, slave holding economy and those that preferred to move the nation in a more industrial direction and favored the abolition, or at least the limiting, of slavery (The American Pageant 247). Also, as was the case during the first few years as a nation, the two camps were also divided on the issue of states rights. Those who favored the Southern life held strong belief in state's rights whereas the pro-Northern factions seemed to recognize the necessity of a strong central government to the life of the nation. Into this situation stepped the brazen, headstrong, and idealistic Andrew Jackson (Axelrod 98). (The American Pageant What Every American Should Know About American History) Andrew Jackson, a westerner, was a new type of politician. He was born in the Wexhaw Creek region of South Carolina, bordering North Carolina, on March 15, 1767 ("Andrew Jackson"). A child of the frontier, he was the product of hardship. From an early age, Jackson was accustomed to having to fight for what he needed. He was nine at the outbreak of the Revolutionary War and by the time he was fourteen he was a wounded veteran. During the war, his mother and two brothers were killed and he nearly starved to death. As a boy, he was held prisoner by an English officer. ...read more.

("Tennessee's Andrew Jackson and the Expansion of Democracy" The American Pageant) When Election Day 1828 arrived, it was no surprise to anyone that Jackson emerged as the victor. The emotions of the people, be it anger, admiration, patriotism, or joy over the idea of having a fellow common man in office had overshadowed the issues of the times. Jackson's campaign brought about a new form of politics. It reestablished the two party system in America and highlighted the importance of emotions in elections. Jackson's popularity reelected him in 1832 and carried him through to the mid-1830s. During this time the Whigs evolved from the National Republicans, and numerous smaller parties, to become Jackson's strongest opponents (United States History 192). Regardless, in 1836 Jackson passed the torch to his hand picked successor, Martin Van Buren. Van Buren's term in office was marred by difficulties, it was marked by economic depression, high unemployment, and numerous border disputes, in both Canada and Mexico (Newman 192). (United States History) Throughout the 1840s, beginning with Van Buren's second run for president, the emotions of the people once more came into play. Capitalizing on the campaign precedent set in the 1828 election, the Whigs selected William Henry Harrison who, as observed by Thomas Bailey: ...was nominated primarily because he was issueless and enemyless - and a most unfortunate precedent was thus set. John Tyler of Virginia, and after thought, was selected as his vice-presidential running mate. (Bailey 294) Van Buren lost to Harrison who had acted out a truly Jacksonian role to perfection. Playing off the feelings of the nation, he falsely portrayed himself as a common man, born in a log cabin and a lover of hard cider while calling Van Buren an elitist. (The American Pageant) With the emergence of the new two party system during this era, political campaigns devolved from issue oriented platforms to arenas replete with emotional symbolism. As stated by David M. Kennedy: ...the blatant bunkum and silly slogans set an unfortunate example for future campaigns. Democracy calls for hard thinking, not hard cider; for dignity, not delirium. (Kennedy 295-296) (The American Pageant) ...read more.