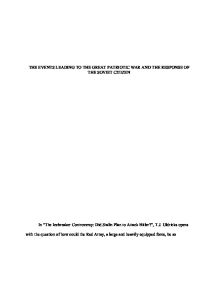 The events leading to the great patriotic war and the response of the Soviet citizen.

THE EVENTS LEADING TO THE GREAT PATRIOTIC WAR AND THE RESPONSE OF THE SOVIET CITIZEN In "The Icebreaker Controversy: Did Stalin Plan to Attack Hitler?", T.J. Uldricks opens with the question of how could the Red Army, a large and heavily equipped force, be so thoroughly decimated by the Wehrmacht, especially when evidence of the impending attack was plentiful. There have been many attempts to answer this question; most have fallen into three categories: 1 - Germany attacked the USSR because they feared an attack by Stalin, and this attack had the effect of catching the Soviets of balance; 2 - Stalin and Russia were not acting as rational actors with regard to German aggression. Stalin was delusional about the safety of the non-aggression pact with Hitler; 3 - Stalin was not only rational, but acted along the only course of action that he could based on the Soviet Union's capabilities and geopolitical realities during the 1930's. This short paper will show that the last category comes closest answering Uldrick's question. Why Germany Invaded Germany's decision to invade Russia was born of Hitler's decision to destroy a Marxist/Communist Soviet Union as early as 22 years earlier. In May of 1933, when Hitler was addressing a public rally he declared: " Some 14 to 15 years ago I stated to the German nation that I saw my historical duty in destroying Marxism. ...read more.

War could begin with large-scale operations with sudden, surprise initiation, conducted by the belligerents on land, at sea and air. It followed that an enemy could forestall the Russians and strike first.viii From June 1937 to the end of 1938, Tukachevskii and many Russian military visionaries were shot, these purges continued through 1941. Starting in 1940, the Soviet command, now staffed with marginally competent officers, made the mistake of concentrating only on offensive operations. They made no attempt to plan for defensive formations. Finally, after the debacle of the Finnish-Soviet war, Stalin started to see the weaknesses of his military represented in the war games of that same year. He recommended that his generals should pay close heed to the lessons of the war-game. He began to realize that his staff was not seeing the reality of the situation and his military was unprepared. There were many in Europe that witnessed the same weaknesses.ix Geopolitics: The main concern for Stalin and the Soviet Union in 1940 was neither lands they could conquer nor spreading the revolution past their borders, but the politics and perceived dangers from their neighbors in Europe. They maintained a suspicion of all imperialist powers and this drove a desperate search for security.x Since the early 1930's Russia called for, at various international conferences, agreements that would have stopped Hitler's plans. ...read more.