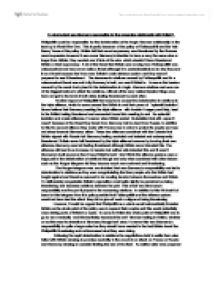 The extent to which Germany was responsible for world war one

To what extent was Germany responsible for the worsening relationship with Britain? Weltpolitik could be responsible for the deterioration of the Anglo-German relationship in the lead up to World War One. This is partly because of the policy of Flottenpolitik and the 'risk theory' focus of the policy. Britain felt their naval supremacy was threatened by the German naval expansion however it was never Germany's intention to have a navy the same size or larger than Britain; they wanted one 2/3rds of the size which shouldn't have threatened Britain or their supremacy. A lot of the threat that Britain saw coming from Flottenpolitik was misconceived and was never really a threat although it is understandable as to why they saw it as a threat because the Navy was Britain's main defence system and they weren't prepared to see it threatened. The decrease in relations caused by Flottenpolitik and the misconceived threat was not fully Germany's fault, nor was it Britain's. ...read more.

These two alliances combined with the Entente that Britain signed with Russia left Germany feeling encircled and isolated and subsequently threatened. Britain never felt threatened by the triple alliance however by forming their own alliances Germany were left feeling threatened although Britain never intended this. The alliances did lead to an increase in tension but neither side intended this and it wasn't Germany's fault anymore than it was Britain's fault. I don't think the alliance systems were a huge part in the deterioration of relations though and only when combined with other factors such as the Krugar telegram did they become much more relevant and threatening. The Krugar telegram was one incident that was Germany's responsibility and led to deterioration in relations as they were congratulating the Boer people who the British had fought against and therefore seemed to be creating tension between themselves and Britain. To deliberately congratulate Britain's opposition could quite rightly be perceived as being threatening and decrease relations between the pair. ...read more.

Following the rapid deterioration in relations the negotiations held to settle them also failed with Britain refusing to promise neutrality in the event of an attack on France or Russia and Germany refusing to consider limiting the size of the fleet. As neither side were prepared to back down the relations worsened further. The fact that neither side were prepared to back down suggests that it was equally their responsibility, not mainly Germany's. The fail in negotiations highlight how poor relations were and lack of trust between the two countries. By reaching this stalemate in negotiations paired with the mainly misconceived threat both sides saw the relations had deteriorated to a low point and this cannot be solely blamed on Germany, things were likely to go round in circles as neither side wanted to change until they felt the threat weaken but for that to happen one of the sides needed to make the first step. It largely wasn't down to Germany that relations worsened it was a combination of both sides and them both reacting against incidents that weren't even aimed at them. ...read more.