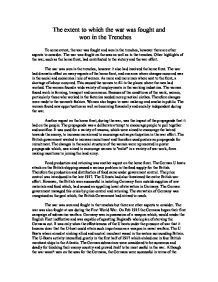 The extent to which the war was fought and won in the Trenches To some extent, the war was fought and won in the trenches, however there are other aspects to consider. The war was fought on the seas as well as in the trenches. Other highlights of the war, such as the home front, had contributed to the victory and the war effort. The war was won in the trenches, however it also had involved the home front. The war had dramatic effect on many aspects of the home front, and one area where changes occurred was in the social and economical role of women. As more and more men where sent to the front, a shortage of labour occurred. This caused the women to fill in the places where the men had worked. The women found a wide variety of employments in the working industries. The women found work in farming, transport and commerce. Because of the conditions of the work, women, particularly those who worked in the factories needed more practical clothes. ...read more.

Therefore the production and distribution of food came under government control. The price control was introduced in the late 1917. The U-boats had also threatened the entire British war effort. However, the British were successful in isolating Germany from outside supplies of raw materials and food which, had caused an appalling level of starvation in Germany. The German government managed this crisis by price control and rationing. The starvation of Germany was recognised as the goal which, the British Government had strived to reach. The war was won and fought in the trenches but there are other aspects to consider. The war was also fought at sea during the First World War. On Feb 1915 the Germans began their first campaign of submarine warfare. Germany was in possession of a weapon which, would render the English Fleet ineffective and was capable of upsetting England's whole plan of starving the Germans out. It was only when the effectiveness of the U boats under the pressure of war that it became clear that the U-boat could attain such importance as a weapon in naval warfare. ...read more.

Their morale had also collapsed. The allies where also reinforced with soldiers from America, which helped further increased allied superiority. Another reason for the allied victory, besides winning in the trenches, was the German March Offensive. Germany had lost a huge number of men and they were running out of reserves. The March offensive was almost sucessful in winning the war. The Germans gained a huge number of land, but however, the allies kept on fighting and wouldn't give up. To conclude, I believe that to a great extent the war was fought and won in the trenches. There were many reasons for the collapse of the German war effort. The victory that the allied had achieved on the seas showed that the sea also played its part in the war. Although the German U-Boats had failed to achived victory, they had proved to be a weapon with which the Germans could inflict direct injury on English economic life and which almost won them the war. The home front was also crucial during the Great War. The war had a sensational effect on many aspects on the home front. ...read more.