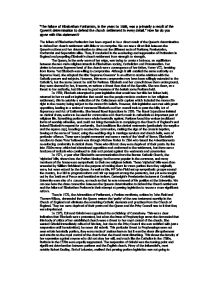 The failure of Elizabethan Puritanism

"The failure of Elizabethan Puritanism, in the years to 1588, was a primarily a result of the Queen's determination to defend the church settlement in every detail." How far do you agree with this statement? The failure of Elizabethan Puritanism has been argued to be a direct result of the Queen's determination to defend her church settlement with little or no comprise. We can see a direct link between the Queen's actions and her determination to drive out the different sects of Puritans; Presbyterian, Conformist and Separatists alike. Thus, if concluded in the weakening and suppression of Puritanism in England and propelling Elizabeth's church settlement from strength to strength. The Queen, in the early years of her reign, was trying to create a balance, an equilibrium between the two main religious strands in Elizabethan society, Catholicism and Protestantism. Her desire to become Supreme head of the church was a consequence of her father, Henry VIII, breaking from Rome. Yet Elizabeth was willing to compromise. Although it still entailed the same authority as Supreme Head, she adopted the title 'Supreme Governor' in an effort to soothe relations with the Catholic powers and subjects. However, this same compromise may have been willingly extended to the Catholic's, but the same cannot be said for Puritans. ...read more.

Then in 1572, the Admonition of Parliament, a Puritan manifesto, written by John Field and Thomas Wilcox, demanded that the Queen restore the 'purity' of the new testament worship in the Church of England and eliminate the remaining Catholic elements and practises from the Church of England. They too were deprived of their posts and the Queen and the Privy Council saw to it that they were imprisoned. In 1575, Edmund Grindal was appointed the archbishop of Canterbury. This was a clear indication that Elizabeth was a protestant, but when the issue of Prophesyings arose she demanded that this body of critics of her established church were a threat to her royal control of the church. She wanted Grindal immediately relived of his duty, but due to the Privy Council she was satisfied with just a suspension until he submitted, he never did submit. This particular threat to Prophesyings were not even whole heartedly puritan, they were made of zealous laymen but it was the sheer disruptiveness and attacks on the royal control of the church that she found most disturbing. This shows the ferocity of her repression against anyone who did not obey her will, and much like the Catholics in the 1580s, Puritans in the 1570s were equally suppressed. ...read more.

To be realistic legislation was not the sole reason they failed. England was moving towards war with Spain during Elizabeth's reign. By the 1580s England was at war with Spain so many Puritans rallied to defend Protestantism in England concentrating on what they agreed with the church rather than challenging it. Was it Queen Elizabeth's determination that saw the Puritan ideology come crashing down, or the combination of her councillors determination, high ranking conservative influentials, such as the Archbishop of Canterbury, John Whitgift and Cecil. Certainly Puritan numbers in parliament despite Neale's arguments were only ever small and there was little support in parliament for changing the structure of the church. Failure also rested on those who had authority or influence in certain sections of society. For example, the death of Puritan supporters in government, like the Earl of Leicester. Nonetheless, Yet for the majority of Puritans there was no alternative to Elizabeth as she was all that kept them from the Catholic 'anti-Christ', so it was better to conform to the Elizabethan Church, despite its shortcomings, than allow divisions to rise and to give opportunities to Catholic forces. Elizabeth's legislation played a major part in their demise as she was determined to protect the settlement. The imprisonment of Cope and Wentworth for discussing the Bill and Book in 1587, house arrest of Grindal and laws against Puritans were obvious signs of her efforts. ...read more.