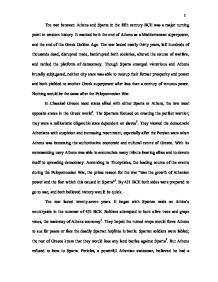 The Fall of Classical Greece

The war between Athens and Sparta in the fifth century BCE was a major turning point in western history. It marked both the end of Athens as a Mediterranean superpower, and the end of the Greek Golden Age. The war lasted nearly thirty years, left hundreds of thousands dead, disrupted trade, bankrupted both societies, altered the course of warfare, and rattled the platform of democracy. Though Sparta emerged victorious and Athens brutally subjugated, neither city state was able to recoup their former prosperity and power and both yielded to another Greek superpower after less than a century of tenuous peace. Nothing would be the same after the Peloponnesian War. In Classical Greece most states allied with either Sparta or Athens, the two most opposite states in the Greek world1. The Spartans focused on creating the perfect warrior; they were a militaristic oligarchic state dependent on slaves2. They viewed the democratic Athenians with suspicion and increasing resentment, especially after the Persian wars when Athens was becoming the authoritative economic and cultural centre of Greece. With its commanding navy Athens was able to accumulate many tribute-bearing allies and to devote itself to spreading democracy. According to Thucydides, the leading source of the events during the Peloponnesian War, the prime reason for the war "was the growth of Athenian power and the fear which this caused in Sparta"3. By 431 BCE both sides were prepared to go to war, and both believed victory would be quick. ...read more.

He spent the next 20 years in exile. The Peloponnesian War marked the end of formalized warfare in Greece. Whole cities were destroyed and their inhabitants murdered or enslaved. After a decade of fighting the Peace of Nicias sought to ally Sparta and Athens. The terms stated that peace between the Peloponnesian League and the Delian League was to last for 50 years, and both sides were to return what land they had gained from the enemy17. This "uneasy peace"18 did not last long. By 418 BCE the truce was officially over; Athenian coastal attacks of the Peloponnesus had not ceased, and King Agis of Sparta attacked Mantinea and Argos19. In 415 BCE the Athenians embarked on their most controversial and disastrous military expedition to date. They "resolved to sail again against Sicily...and, if possible, to conquer it....they did not realize that they were taking on a war of almost the same magnitude as their war against the Peloponnesians"20. The Athenians believed that if they could conquer the large, fertile island they could cease grain imports into the Peloponnesus as well as increase imported grain for themselves21. They underestimated the size and strength of Sicily. The expedition was also poorly led22. The Athenian Assembly sent three commanders: Nicias, Lamachus, and the traitorous Alcibiades who jumped ship in southern Italy and fled to Sparta. After arriving at Syracuse the Athenian fleet waited several months before attacking thus enabling the Syracusans to prepare. ...read more.

Athens was able to throw off the Spartan yoke in little over a year and reinstate democratic rule. An oligarchic Sparta was incapable of running an empire, even with Persian support. Classical Athens demonstrates a remarkable example of the resiliency of democracy. But, if Athens had not been so determined to spread democracy and to extend their empire throughout the Aegean, the thirty year long battle and its irreparable damage to classical Greek civilization may have been avoided entirely. Lessons to be learned from the Athenian empire are glaringly apparent in today's world of superpowers run by corporations where present-day governments, in a quest for secure oil reserves, again wage war under the guise of spreading democracy. The economic and political costs of the war in Iraq have been devastating to America and her allies. America finds herself increasingly weakened and isolated from the rest of the world. Any claims the United States may have had to moral superiority have been destroyed. Tens of thousands of civilians are being slaughtered in the chaos that the war has created. Iraq's infrastructure has been destroyed and the economy devastated. Much of the population has been reduced to poverty. It is imperative that democracy consider human rights before the interests of the state. The deplorable impact upon the populace by Athens attempts to spread democracy throughout ancient Greece are being echoed today in America's attempts to impose democracy in the Middle East. The war is undermining and making unpalatable democracy itself. And, like ancient Athens, America risks finding its seemingly infinite power and prosperity irrevocably damaged. "Those who cannot remember the past are condemned to repeat it. ...read more.