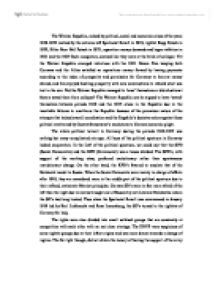 The fall of The Weimar Republic

The Weimar Republic, rocked by political, social and economic crises of the years 1919-1923 marked by the extreme left Spartacist Revolt in 1919, rightist Kapp Putsch in 1920, Hitler Beer Hall Putsch in 1923, reparation money demands and hyper-inflation in 1921 and the 1923 Ruhr occupation, seemed like they were at the brink of collapse. Yet the Weimar Republic emerged victorious with the 1924 Dawes Plan keeping both Germans and the Allies satisfied as reparations money flowed by having payments according to the index of prosperity and permission for Germany to borrow money abroad, and this enjoyed bustling prosperity with new constructions to rebuild what was lost in the war. Did the Weimar Republic managed to 'save' themselves or did situational factors saved them from collapse? The Weimar Republic can be argued to have 'saved' themselves between periods 1919 and the 1923 crises in the Republic due to the inevitable failures to overthrow the Republic because of the premature nature of the attempts that lacked overall coordination and the Republic's decisive action against these political revolts and by Gustav Stresemann's resolutions to German economic plight. ...read more.

The rights; demobilized army officers and volunteer vigilantes, summoned by the SD's, crushed the Spartacist revolt and murdered Liebknecht and Luxemburg, further pulling away the SPD's from the KPD's. Government actions that were decisive and effective to save the Weimar Republic played a large part when we assess how the Republic saved itself. After the election of the National Constituent Assembly and establishment of the Republic in July 1919 with the result of a more 'centered' Assembly of SD's, Center party and liberal democrats, a rightist putsch led by Dr. Kapp emerged in 1920 with a group of disaffected army officers and another in 1923 in Munich led by Adolf Hitler. The Weimar Republic effectively put down these revolts by President Edbert's proper utilization of Article 48 of the Constitution. This was also applied for other leftist movements that was crushed; the Spartacist, Ruhr and Saxon threats. Three examples of the effectiveness of Article 48 utilization is the extent of the use to which political power was transferred to regional military commanders under Berlin's Ministry of Defense orders and when Prime Ministers of Saxony, ...read more.

If there was unity in a cause to overthrow the Weimar Republic in the crisis years 1919-1923, the Republic would not stand a chance when action is taken from a consensus to remove the Republic. Situational factors that contribute to the preservation of the Republic in the form of restlessness of the German people was not strong enough to topple the Republic due to differences in views coming from different hues of the political spectrum, hence there were different objectives and priorities. Thus as we can see that the failure of revolt was inevitable due to lack of unity, direction and coordination to topple the Weimar Republic, the Republic stood strong in the crisis years. Internal factors that contribute to the survival of the Weimar Republic during the crisis years include the decisions made in order to control the chaotic, revolting situation in Germany by careful utilization of Presidency in using Article 48 and effective leading of Chancellor Gustav Stresemann who stabilized the currency and created a path for the Allies to view them as deserving enough for the Dawes plan that kept reparations money flowing and gave Germany a bustling prosperity in rebuilding a new and more modern Germany. ...read more.