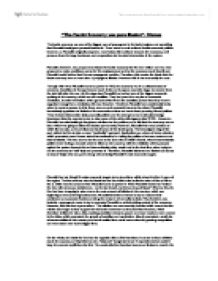 "The Fascist Economy was pure illusion". Discuss The fascist economy was one of the biggest uses of propaganda in the fascist regime, and something that Mussolini took great personal interest in. There were no real outlined Fascist economic policies however, as Mussolini originally adopted a more laissez-faire attitude towards the economy, until pressure from the large businesses and corporations led to state intervention in the system. Mussolini, however, was prepared to distort the fascist economy for his own welfare and was even prepared to make conditions worse for his employees just so that the economy could benefit and Mussolini could further feed his vast propaganda machine. Therefore, this creates the thesis that the fascist economy was no more than a propaganda illusion. However this is not necessarily the case. To begin with when Mussolini came to power in 1922, the economy was in a unilateral state of recovery. Conditions in Europe became much better as European countries began to recover from the debt left after the war. At this stage also, Mussolini had curbed one of the biggest economic uprisings in the country, which was the socialists. They had paved the way for an economic revolution, but after the failure of the general strike where the socialists proved that they weren't organised enough for a revolution, this was thwarted. ...read more.

This wasn't helped either by Mussolini's other major economic policy which was the Battle of the Marshes. This aimed to provide more agricultural land to grow more grain and to sort out problems of drainage and infertile land. It also attempted to provide more jobs to people in the South to fix the problems which had been created there by Mussolini's other battles. However, the only real success of this battle was in the South in the marshes of Rome, which was the only city where the irrigation problems were sorted out. The policies didn't really affect the North where most of the increased production came from, as these areas didn't really need money putting into them in the first place. Northern landowners also had always been "classical" fascist supporters so therefore they were benefited for no apparent reason, when the real demands came from the South of the country. "Success" in this battle was therefore not achieved, and all it really did was to make the north/south divide in the country even greater. Again, this was an "illusion" to the Italian people, particularly in the south of the country, as they were given economic figures which somewhat "exaggerated" the truth. ...read more.

Mussolini was therefore creating an illusion to the workers that they would have fair representation under the new system, when instead they were being slowly depowered and their existence becoming more and more insignificant. The employers however were not happy with this system either. Mussolini wanted an interventionalist system where wages & prices were fixed. However, the employers wanted control and wanted free employer negotiation. The employees themselves, represented by a labour confederation know as the FLC, were therefore made powerless to keep the employers happy. This led to a rise in numbers of members of the FLC, as many wanted to protest against the new system and have their voices heard. It seems therefore that Mussolini was ignoring his own people in favour of an increased element of control. This therefore describes the illusion that Mussolini himself was causing to the people about the state of the economy. What seemed to be an efficient, self-sufficient & booming economic system was in fact littered with corruption and false interests. Mussolini claimed to the people that "the fascists had abolished the troubles and disorder that poisoned the national soul" [autobiography extract] when instead, with the new system of corporativism and the old effects from the economic battles still looming, Mussolini was providing the poison for the economic soul of Italy. ...read more.