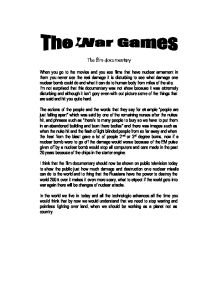 The film documentary When you go to the movies and you see films that have nuclear armament in them you never see the real damage it is disturbing to see what damage one nuclear bomb could do and what it can do to human body from miles of the site, I'm not surprised that this documentary was not show because it was extremely disturbing and although it isn't gory even with out picture some of the things that are said and hit you quite hard. ...read more.

put them in an abandoned building and burn there bodies" and there was images such as when the nuke hit and the flash of light blinded people from so far away and when the heat from the blast gave a lot of people 2nd or 3rd degree burns, now if a nuclear bomb were to go off the damage would worse because of the EM pulse given off by a nuclear bomb would stop all computers and cars made in the past 20 years because of the chips in the starter engine. ...read more.

Russians have the power to destroy the world 200 x over it makes it even more scary, what to expect if the world gets into war again there will be changes of nuclear attacks. In the world we live in today and all the technologic advances all the time you would think that by now we would understand that we need to stop warring and pointless fighting over land, when we should be working as a planet not as country. ...read more.