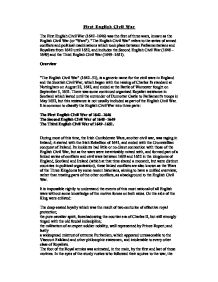 This was because of Lancashire and the West Riding, and above all because the port of Hull, in the hands of the Fairfaxes, constituted a menace that the Royalists of the East Riding refused to ignore. Hopton's advance too, undertaken without the Cornish levies, was checked in the Battle of Sourton Down (Dartmoor) on 25 April. On the same day, Waller captured Hereford. Essex had already left Windsor to undertake the siege of Reading. Reading was the most important point in the circle of fortresses round Oxford, which after a vain attempt at relief, surrendered to him on 26 April. Thus the opening operations were unfavourable, not indeed so far as to require the scheme to be abandoned, but at least, delaying the development until the campaigning season was far advanced. Victories of Hopton But affairs improved in May. The Queen's long-expected convoy arrived at Woodstock on 13 May. Stamford's army, which had again entered Cornwall, was attacked in its selected position at Stratton, and practically annihilated by Hopton on 16 May. This brilliant victory was due, above all, to Sir Bevil Grenville and the lithe Cornishmen. Though they were but 2,400 against 5,400, and destitute of artillery, they stormed "Stamford Hill", killed 300 of the enemy and captured 1,700 more with all their guns, colours and baggage. Devon was at once overrun by the victors. Essex's army, for want of material resources, had had to be content with the capture of Reading. A Royalist force under Hertford and Prince Maurice von Simmern (Rupert's brother) moved out as far as Salisbury to hold out a hand to their friends in Devonshire. Waller, the only Parliamentary commander, left in the field in the west, had to abandon his conquests in the Severn valley to oppose the further progress of his intimate friend and present enemy, Hopton. Early in June, Hertford and Hopton united at Chard and rapidly moved, with some cavalry skirmishing, towards Bath, where Waller's army lay. ...read more.

that the King despatched Hopton to take charge of Bristol. Nor were things much better at Oxford. The barriers of time and space, and the supply area had been deliberately given up to the enemy. Charles was practically forced to undertake extensive field operations, with no hope of success, save in consequence of the enemy's mistakes. The enemy, as it happened, did not disappoint him. The King, probably advised by Brentford, conducted a skilful war of manoeuvre in the area defined by Stourbridge, Gloucester, Abingdon and Northampton. At the end, Essex marched off into the west with most of the general service troops to repeat at Lyme Regis, his Gloucester exploit of 1643, leaving Waller to the secondary work of keeping the King away from Oxford and reducing that fortress. At one moment, indeed, Charles (then in Bewdley) rose to the idea of marching north to join Rupert and Newcastle, but he soon made up his mind to return to Oxford. From Bewdley, therefore, he moved to Buckingham, the distant threat on London, producing another evanescent citizen army drawn from six counties under Major-General Browne. Waller followed him closely. When the King turned upon Browne's motley host, Waller appeared in time to avert disaster, and the two armies worked away to the upper Cherwell. Brentford and Waller were excellent strategists of the 17th-century type, and neither would fight a pitched battle without every chance in his favour. Eventually on 29 June, the Royalists were successful in a series of minor fights about Cropredy Bridge. The result was, in accordance with continental custom, admitted to be an important victory, though Waller's main army drew off unharmed. In the meantime, on 15 June, Essex had relieved Lyme and occupied Weymouth, and was preparing to go farther. The two rebel armies were now indeed separate. Waller had been left to do as best he could, and a worse fate was soon to overtake the cautious earl. By Jennifer Sanders ...read more.