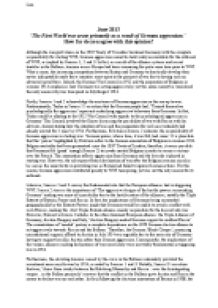 'The First World War arose primarily as a result of German aggression.' How far do you agree with this opinion? Use Sources 1, 2 and 3 and your own knowledge related to this controversy

﻿Lara June 2013 ?The First World war arose primarily as a result of German aggression.? How far do you agree with this opinion? Although the war guilt clause in the 1919 Treaty of Versailles burdened Germany with the complete responsibility for starting WWI, German aggression cannot be held solely accountable for the outbreak of WWI, as implied by Sources 1, 2 and 3. In fact, as a result of the alliance systems and recent troubles in the Balkans; tensions across Europe had been simmering for quite some time prior to WWI. What is more, the increasing competition between Britain and Germany to drastically develop their navies indisputably made these countries more open to the prospect of war due to having such an advanced naval force. Indeed, the German War Council in 1912 and the annexation of Belgium in summer 1914 emphasises how Germany was acting aggressively; yet this alone cannot be considered the only reason why war transpired in July/August 1914. Firstly, Sources 1 and 2 acknowledge the existence of German aggression in the run-up to war. Predominantly, Taylor in Source 1?s assertion that the German people had, ?Trained themselves psychologically for aggression? represents underlying aggressive behaviour from Germany. ...read more.

However, Howard in Source 3 alludes to the other dominant European alliance: the Triple Alliance of Germany, Austria-Hungary and Italy, ?Austria-Hungary needed German support to confront Russia?. The connotations of ?needed? portray a complete dependence on the 1879 German-Austria alliance to act aggressively towards Russia and the Balkans. Therefore, the German ?Blank Cheque?, promising unconditional support, offered to Austria in July 1914 was arguably due to the necessity of Germany having to support her ally, Austria rather than German aggression. Consequently, the implications of the various alliances making declarations of war more likely were inevitably fundamental in triggering war in 1914. Furthermore, the elevating tensions caused by the crisis in the Balkans undeniably provided the resentment necessary for war by 1914, as noted by Sources 1 and 3. Notably, Source 3?s assertion that war, ?Arose from rivalry between the Habsburg Monarchy and Russia?over the disintegrating empire?in the Balkan peninsula? conveys that the conflict in the Balkans gave Austria and Russia the means to declare war on each other. In fact, following the Austrian annexation of Bosnia in 1908; the desire for Balkan independence grew drastically, especially in Serbia. ...read more.

Therefore, despite the Naval Race only taking place between Germany and Britain, the strength of their respective navies by 1914 inevitably encouraged the countries to become entangled in war due to the possibility of demonstrating their naval dominance to other European Powers. In conclusion, although Germany was indeed acting aggressively prior to WW1; this behaviour from Germany cannot be seen as the only means of provoking WW1. Rather the hostility of the European alliances and the elevating tensions originating from the Balkan crisis were fundamental in causing a general war in 1914. The growing resentment between Austria and Russia over the ambiguous state of the Balkans inevitably caused these Powers to call upon their respective allies for support, especially Germany and France, once the Serbian ultimatum was rejected in July 1914. Although the Naval race between Britain and Germany provided them with a navy strong enough to withstand war, the mounting conflict amongst their allies undeniably led them into declarations of war. Therefore, despite the guilt placed on Germany by the Treaty of Versailles and historians like Fritz Fischer; German aggression was a minor contributor to starting war compared with the animosity created by the European alliances and the Balkan crisis. ...read more.