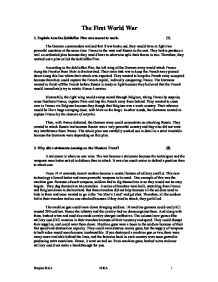 The First World War - Explain how the Schlieffen Plan was meant to work.

The First World War 1. Explain how the Schlieffen Plan was meant to work. (7) The German commanders realised that if war broke out, they would have to fight two powerful countries at the same time: France to the west and Russia to the east. They had to produce a well co-ordinated plan because they would have to otherwise split their forces in two. Therefore, they worked out a plan called the Schlieffen Plan. According to the Schlieffen Plan, the left wing of the German army would attack France along the Frontier from Metz to Switzerland. Their main task was to keep the French army pinned down along this line where their attack was expected. They wanted to keep the French army occupied because then they could capture the French capital, indirectly conquering France. The Germans wanted to finish off the French before Russia is ready to fight because they believed that the French would immediately try to retake Alsace-Lorraine Meanwhile, the right wing would sweep round through Belgium, taking France by surprise, cross Northern France, capture Paris and trap the French army from behind. They wanted to cross over to France via Belgium because they though that Belgium was a weak country. ...read more.

They could even destroy enemy guns, but the supply of weapons to both sides would soon become inexhaustible. If you destroyed a machine gun or two, there were many more available behind the lines, and the factories back in each country were soon geared to producing extra munitions. Hence, it went on and on. Even machine guns, barbed wires and new artillery could not make a breakthrough for you. Therefore, this defensive war technique leaded to a stalemate. Both the opponents ended up defending themselves and not attacking at all. I think that the most important cause that led to a stalemate was the use of trenches because the soldiers were hiding from the war instead of attacking. 3. The following were equally important reasons why the stalemate on the Western Front was finally broken: (10) * new technology like the tank * the American entry into the war * the blockading of German ports * the German offensive in March 1918 The tank was a British invention, which was used for the first time at the Battle of the Somme. They advanced ahead of the infantry, devastating barbed wire defences and spraying the enemy with machine gun fires. They caused alarm among the Germans because of their size and crushing ability. ...read more.

It was very effective as the Germans broke through the allied lines in many places. Soon they advanced 64km nearer Paris which was now in range of heavy gunfire. Personally, I feel that the German Offensive was the most important reason why the stalemate on the Western Front was finally broken because the German commander took a winner take it all chance, a risk only a brave soldier would have taken. In the end, the Germans suffered a few losses but broke through the allied lines in many places. I do feel that a couple of factors are inter-linked to each other. For example, the entry of USA in the war and the allied victory are linked to each other. If the USA had not entered the war and supplied loans and arms to the allied powers, they could never have won. Basically, support from USA, the most powerful nation, gave rise to the allied victory over the war. I also feel that the Allied blockage of the German ports and Germany's defeat in the war are inter-linked. If the German ports had not been blocked, then their economy would not have "starved" and this led to a dramatic drop in their efficiency. This was one of the major factors that led to Germany's defeat in the war. Ranjan Kale 10KA 6 ...read more.