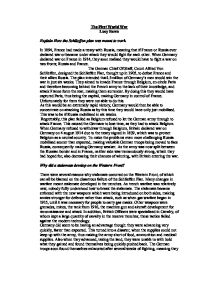 The First World War - questions and answers on the Schlieffen plan, and the Western Front and its stalemate.

The First World War Lucy Bawn Explain How the Schlieffen plan was meant to work. In 1894, France had made a treaty with Russia, meaning that if France or Russia ever declared war or became under attack they would fight for each other. When Germany declared war on France in 1914, they soon realised they would have to fight a war on two fronts; Russia and France. The German Chief Of Staff, Count Alfred Von Schlieffen, designed the Schlieffen Plan, thought up in 1905, to defeat France and their allies Russia. The plan intended that1.5million of Germany's men would win the war in just six weeks. They aimed to invade France through Belgium, en-circle Paris and therefore becoming behind the French army to the lack of their knowledge, and attack France form the rear, making them surrender. By doing this they would have captured Paris, thus being the capital, making Germany in control of France. Unfortunately for them they were not able to do this. As this would be an extremely rapid victory, Germany would then be able to concentrate on attacking Russia as by this time they would have only just mobilised. This was to be if Russia mobilised in six weeks. Regrettably, this plan failed as Belgium refused to let the German army through to attack France. This caused the Germans to lose time, as they had to attack Belgium. ...read more.

These battles all made stalemate even longer, as the Germans had not planned for this to happen in the Schlieffen Plan. In all of these battles neither allies were strong enough to break all stalemate. In some places stalemate was broken but easily taken back as they couldn't keep up the defence. The following were equally important reasons why the stalemate on the western front was broken: New technology like the tank The American entry into the war The blockading of German ports The German offensive in March 1918 Explain how far you agree with this statement. The new technology invented in the duration of World War One made a dramatic impact to the events which occurred. The impact was usually immediate, such as when the German U-boat was introduced it sank three British Cruisers in the North Sea. Though the technology was not always successful or efficient. The Tanks were first introduced on the 15th September 1916 in the Battle of The Somme, Lead by Sir Douglas Haig. This had very little impact on as they were used in too small of a number, only 49 to reinforce infantry attacks, and 18 of those broke down all too easily. The intension was to scare German infantry, though all they saw was shambles. The first positive use of tanks was at the Battle of Cambrai, where there were 380 tanks present and they broke the stalemate but were unable to hold the land they gained. ...read more.

The Germans eventually ground to a halt, allowing the British to regroup. All of the above were very important in breaking the stalemate on the western, though you should not be mislead that any of them broke stalemate single handed. The new weapons that were introduced were an important stage of winning the war, as well as a huge advance in technology. The weapons were not all that great, as when Britain invented a new machine gun or ship, Germany soon copied and Visa Versa. As time went on and the German men became tired, Britain decided to block the German ports. The blockade of German ports meant that no supplies could get through and the German females and children began to starve. The soldiers became concerned for their families, and lost moral to continue with the war, resulting in them becoming weaker. Germany's final attempt to win the war, 'Operation Michael' was destroyed when America entered the war in April 1917. The fresh new soldiers and supplies made British stronger and Germany was becoming considerably weak. Eventually, the British along with the Americans pushed Germany back into her own country, but before this could happen they asked for an armistice and it was signed on 11 November 1918. This peace treaty was signed at Versailles in January 1919: it told the Germans they had to return land, African colonies were to be shared, they had to accept blame and to pay war reparations of �6600 million. ...read more.