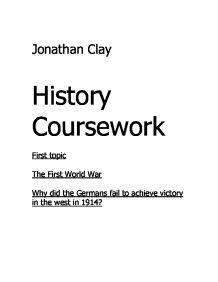 Jonathan Clay History Coursework First topic The First World War Why did the Germans fail to achieve victory in the west in 1914? 1. Look at sources A and B. Explain how Moltke modified the Schlieffen Plan. Use the maps your knowledge and any other sources that may be relevant. Moltke made some very significant changes to the original Schlieffen Plan. The original Schlieffen Plan wanted the German infantry be concentrated in one force as it shows in source A. Alfred von Schlieffen wanted the German infantry to be concentrated in a single sweep so that all the forces would go through Belgium and down to Paris (France). However, Moltke wanted to spread out the forces instead of concentrating them in one place as it shows in both source A and source B. Moltke proposed to position the forces down the western border shared with France. He also wanted to withdraw forces away from the western frontier and put them on the Russian border as a precaution in case of a Russian attack. This meant that forces in the western frontier would not be as strong as they could have been. Source A shows that General Moltke did not put any forces where General Schlieffen wanted them. Moltke spread his forces out too much so that each force would be too weak. ...read more.