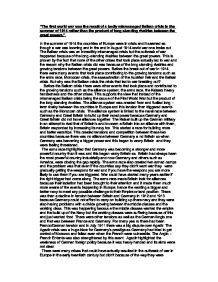 &quot;The first world war was the result of a badly mismanaged Balkan crisis in the summer of 1914 rather than the product of long standing rivalries between the great powers.&quot;

"The first world war was the result of a badly mismanaged Balkan crisis in the summer of 1914 rather than the product of long standing rivalries between the great powers." In the summer of 1914 the countries of Europe were in crisis and it seemed as though a war was looming and in the end in August 1914 world war one broke out. The Balkan crisis was an incredibly mismanaged crisis but the outbreak of war happened because of the long-standing rivalries between the great powers. This is proven by the fact that none of the other crises that took place actually led to war and the reason why the Balkan crisis did was because of the long standing rivalries and growing tensions between the great powers. Before the break out of war in 1914 there were many events that took place contributing to the growing tensions such as the arms race, Moroccan crisis, the assassination of the Austrian heir and the Balkan crisis. But why was the Balkan crisis the crisis that led to war breaking out? Before the Balkan crisis there were other events that took place and contributed to the growing tensions such as the alliance system, the arms race, the Kaisers heavy handedness and the other crises. ...read more.

as the Moroccan crisis where the country's involved did not want war and they were not prepared for a war so they looked at their foreign policy in a different way. The Moroccan crises were an example of the Kaiser's bad decision making and heavy handedness and an example of them arousing suspicions about wanting and preparing for war, even though at this time it was more the Kaisers advisors that were making most of the decisions at that time. Historian Franz Fischer points out that at the war council meeting in 1912 the Kaiser demanded war but didn't push through with it because the Navy was not ready. Germany didn't want Morocco to have reforms that would damage their commercial interests and Morocco was shown to be Frances weakness. The underlying aim of the Moroccan crisis was for the Germans to weaken and destroy the Entente but the outcome of the Moroccan crisis was that it was a blow for Germanys weltpolitik which left Germany humiliated because they had to back down, they found that the Entente was stronger than they expected and increased the tension between Germany and France. Then with the Anglo-French Entente strengthened cordial co-operation with the French became the basis of the British foreign policy and for the first time in 40 years the British government had thought about launching an expeditionary force to the continent. ...read more.

War was the only option for the great powers because they wanted war. This was suggested by Germany's foreign policy and the lateness of the ultimatum Austria gave to Serbia after the assassination as if they had been quicker in acting over the assassination then a world war could have been averted. There may have been 40 years of peace but over those 40 years the tension continued to build. The Kaiser then added to the tensions letting alliances and old treaties slide with countries like Russia and the way the acted with the Moroccan crisis many countries began to feel that Germany were building up and preparing for war which then put them on edge. The Balkan crisis was incredibly mismanaged and was one of the major contributory factors to the outbreak of World War One but it wasn't the main reason war broke out. War broke out because of the long standing rivalries. The great powers of Europe had been preparing for war over a long period of time and the more they prepared the more on edge the powers became fuelling their long standing rivalries and tensions continued to grow. These tensions then triggered a series of events, which resulted in the outbreak of war; it was not the result of a badly mismanaged Balkan crisis but the result of long standing rivalries which are why the Balkan crisis was mismanaged. ...read more.