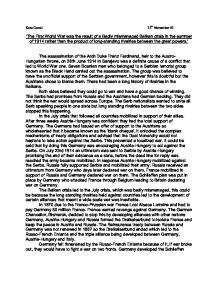 'The First World War was the result of a Badly mismanaged Balkan crisis in the summer of 1914 rather than the product of long-standing rivalries between the great powers.'

Kate Coxell 25th November 02 'The First World War was the result of a Badly mismanaged Balkan crisis in the summer of 1914 rather than the product of long-standing rivalries between the great powers.' The assassination of the Arch Duke Franz Ferdinand, heir to the Austro- Hungarian throne, on 28th June 1914 in Sarajevo was a definite cause of a conflict that led to World War one. Seven Bosnian men who belonged to a Serbian terrorist group known as the Black Hand carried out the assassination. The group was believed to have the unofficial support of the Serbian government, however this is doubtful but the Austrians chose to blame them. There had been a long history of rivalries in the Balkans. Both sides believed they could go to war and have a good chance of winning. The Serbs had promises from Russia and the Austrians had German backing. They did not think the war would spread across Europe. The Serb nationalists wanted to unite all Serb speaking people in one state but long standing rivalries between the two sides stopped this happening. In the July crisis that followed all countries mobilized in support of their allies. After three weeks Austria-Hungary was confident they had the total support of Germany. The Germans had issued an offer of support to the Austrians so wholehearted that it became known as the 'blank cheque', it unlocked the complex mechanisms of treaty obligations and advised that the Dual Monarchy would not hesitate to take action against the Serbs. This prevented a localized war. It could be said that by doing this Germany was encouraging Austria-Hungary to act against the Serbs. On July 23rd 1914 an ultimatum was sent to Serbia by Austria-Hungary promising the end of their existence as a state, before the dead line for reply was reached the army became mobilized. In response Austria-Hungary mobilized against the Serbs. ...read more.

There was conflict that was resolved before world war one suggesting that if there had been no alliances and Germany had not wanted a war all rivalries could have been resolved. In 1889 gold was found in South Africa and Britain wanted to claim it. Rivalries developed with the out break of the Boer war between Britain and the Boers who wanted to keep their gold. Germany became allied with the Boers that angered the British. On the defeat of Britain the German Kaiser sent the Boers a congratulatory telegram causing tension and hostility. This led to the Triple Entente between Britain, France and Russia and Europe was divided in two. Germany and Britain also entered into a naval arms race. Germany wanted a large army and empire and to be the most powerful nation in the world with one of the strongest economies this was known as 'Weltpolitik.' Britain wanted to retain their position of having the largest navy in Europe and Germany believed if they expanded their navy they could gain power leading to the naval arms race that started in April 1898 and caused tension in Europe. The Dreadnought, an advanced and powerful war boat, was developed by Britain in October 1905 and deepened the tension between the two countries. The Anglo-French Entente was felt by the Germans to be threatening and they wanted to end it and stop the chance of France getting revenge. On his visit to Morocco the Kaiser promised the sultan that the Germans would support him if France tried to expand into Morocco. France retaliated to this and war could have resulted but was avoided; however the relationship between France and Britain became closer. In 1906 there was a meeting at Algeciras and it was arranged that the French and Moroccans would trade and also that the British, French and Russians would ally themselves in support against Germany. ...read more.

Serbia won the conflict and almost doubled in size. Tension mounted between Serbia and the Austro-Hungarian Empire and the chance of a conflict increased but the global conflict was not predicted. Tension was caused between the countries in Europe by these long standing rivalries and led to the development of alliances. It almost appeared as if a war was being planned for and Germany was implicated by what happened at the War Council at Potsdam and the development of the Schlieffen plan. Historians are divided as to the cause of the First World War as the background causes are complicated. One German historian, Fischer, blames Germany for causing the First World War he claims that Germany had a 'will to war'. Germany felt threatened by encirclement and had developed an aggressive foreign policy in response. Other historians feel Russia Britain and France didn't want a war; in July 1914 Grey's proposal suggested that Britain did not want to use military conflict to resolve the disputes. However Austria was determined to wage war against Serbia and as a result of this the rest of Europe was dragged into conflict. The driving force behind the tensions created in Europe in the pre war period was Germany. Germany tried to cause trouble between the other great powers. With the naval arms race increasing the tension and Germany realizing that the aim of Weltpolitik could never be achieved frustration mounted. Germany therefore prepared for an international war as can be seen by the Schlieffen plan. The origin and causes of any war is always complicated and the First World War is no exception. It is evident from what I have written that no country was completely to blame, some historians blamed Germany saying the issue of the blank cheque, with all the rivalries and tensions in Europe in the pre war period made war inevitable. The badly mismanaged Balkan crisis of the summer of 1914 was the immediate trigger but without the rivalries between the great powers, which had been going on for a long time, there wouldn't have been a Balkan crisis. ...read more.