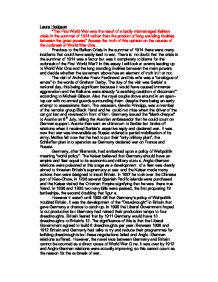 The First World War was the result of a badly mismanaged Balkan crisis in the summer of 1914 rather than the product of long standing rivalries between the great powers&quot; Assess the truth of this opinion

Laura Hodgson "The First World War was the result of a badly mismanaged Balkan crisis in the summer of 1914 rather than the product of long standing rivalries between the great powers" Assess the truth of this opinion on the causes of the outbreak of World War One. Previous to the Balkan Crisis in the summer of 1914 there were many incidents that could have easily lead to war. There is no doubt that the crisis in the summer of 1914 was a factor but was it completely to blame for the outbreak of the First World War? In this essay I will look at events leading up to World War One and the long standing rivalries between the main powers and decide whether the statement above has an element of truth in it or not. The visit of Archduke Franz Ferdinand and his wife was a "catalogue of errors" in the words of Graham Darby. The day of the visit was Serbia's national day, this being significant because it would have caused immense aggravation and the Balkans were already "a seething cauldron of discontent" according to Michael Gibson. ...read more.

Ironically the French and the Germans were not close to war as France gave Germany a small strip of territory in Africa and it was yet another diplomatic defeat for Germany. Anglo-German relations were yet again worsening and the British and the French made new naval and military agreements. In both Moroccan crises the Kaiser was "pushed into confrontation reluctantly" says Graham Darby, for example in 1911 he had to be persuaded to send a gunboat to Agadir. This could be one of the reasons why the two Moroccan crises did not lead to war. However another factor is the economic side of things. The German government was did not know what the public opinion was and they feared that a British blockade would bring economic chaos. International relations changed due to alliances that were made. "All the great powers felt threatened" according to Michael Gibson, so forming an alliance would make the powers feel more secure if war did break out. The first alliance that affected relations was the Franco-Russian Alliance of 1894. This was aimed specifically at Germany as France would support Russia if it was attacked by Germany or attacked by another country supported by Germany and vica versa. ...read more.

That was certainly the case at the time of Versailles and there was a consensus that Germany started the war deliberately and they were made to accept the Article 231, the "war guilt clause". However the German society rejected the defeat and R.J.W Evans believes that German revisionism was "closely associated with the rejection of the so-called war guilt clause of the Peace Treaty". In conclusion, I think that the immediate cause of the outbreak of war was definitely the July crisis in the summer of 1914. However the crucial decisions made by the leading figure were in fact influenced by the rise in international tension from about 1905 which was partly generated by the German policy of Weltpolitik. It's obvious to say that between 1905 and 1913 no-one is authority actually wanted a war and Britain in the actual crisis of the summer of 1914 was neither planning a war nor even sure about what to do in the event of one whereas the Germans as early as 8th July 1912 had discussions about a possible war. The outbreak of war was not a result of a badly mismanaged Balkan crisis in the summer of 1914, it was the final straw of long-standing rivalries. Word Count: 1,971 ...read more.