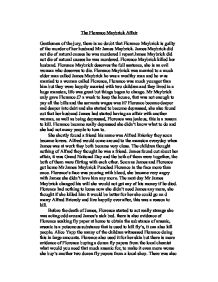 She shortly found a friend his name was Alfred Brierley they soon became lovers. Alfred would come around to the mansion everyday when James was at work they both became very close. The children thought nothing of Alfred they thought he was a friend. James found out about her affair, it was Grand National Day and the both of them were together, the both of them were flirting with each other. Soon as James and Florence got home Mr James Maybrick Punched Florence in the face more than once. Florence's face was pouring with blood, she became very angry with James she didn't love him any more. The next day Mr James Maybrick changed his will she would not get any of his money if he died. ...read more.

Alice Yapp the nanny of the children witnessed Florence doing this in large amounts. Florence also used it for her skin but there is more evidence of Florence buying a dozen fly papers from the local chemist what would you need that much arsenic for, to make it even more worse she buy's another two dozen fly papers from a local shop. There was also traces of arsenic all over the house and in Florence's pockets of her night gown. Florence Maybrick must be Guilty of his murder the evidence points straight to her. It shows she loved another man and there was jealousy which all led to murder, she thought she could get away with such a horrible crime. Gentlemen of the jury Florence Elizabeth Chandler Maybrick is guilty of Mr James Maybrick's murder she deserves no better than to go to prison ?? ?? ?? ?? ...read more.