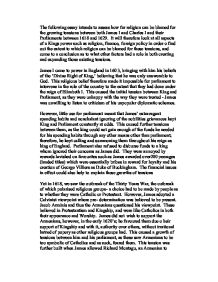 The following essay intends to assess how far religion can be blamed for the growing tensions between both James I and Charles I and their Parliaments between 1618 and 1629.

The following essay intends to assess how far religion can be blamed for the growing tensions between both James I and Charles I and their Parliaments between 1618 and 1629. It will therefore look at all aspects of a Kings power such as religion, finance, foreign policy in order o find out the extent to which religion can be blamed for these tensions, and come to a conclusion as to what other factors had a role in both creating and expanding those existing tensions. James I came to power in England in 1603, bringing with him his beliefs of the 'Divine Right of King,' believing that he was only answerable to God. This religious belief therefore made it impossible for parliament to intervene in the role of the country to the extent that they had done under the reign of Elizabeth I. This caused the initial tension between King and Parliament, as they were unhappy with the way they were treated- James was unwilling to listen to criticism of his unpopular diplomatic schemes. ...read more.

This tension was further built when James allowed Richard Montagu, an Armenian to publish a book about Arminianism. Shortly after his, March 1625, James died, and Charles I took his position as King of England. The Thirty Years was could also be looked at from a political point of view. This war forced James to summon parliament 1621 due to financial pressures. This was mainly concerned with foreign policy, so when the House of Commons tried to debate the wider aspects of this and assert their right to discuss any subject, as previously agreed by James he dissolved them. This caused further tensions between King and Parliament, as James' lack to keep prior agreements meant that the Parliament were being made powerless within a country whereby their role was to assist the king in decision making in order to deliver the best prospects to its people. These tensions, in effect, distanced the King and Parliament, making their "united jobs" within the country non-evident, possibly due to James' religious beliefs of the 'Divine Rights of Kings.' ...read more.

Again, this matter was made worse due to Charles' present favourites, Richard Montagu, who was made Royal Chaplin, later becoming Bishop of Chichester and William Laud becoming Bishop of London. Both of these were Arminians so the Parliament instantly disliked these decisions, made worse by the fact that these new positions within England allowed them to have a greater influence over the King (especially as they stressed obedience to authority), something which not even they had managed to obtain. Overall, it is clear that the relationship between King and Parliament steadily eroded. This was caused not only by religion, but also by a number of contributing factors such as extravagant pending, and bungled foreign policies, which discredited the Kings in the eyes of Parliament. Therefore, it can be said that religion played a strong part in creating the growing tensions between king and parliament between 1618 and 1629 but it was not the sole factor. It could equally be argued that tensions between King and Parliament centred around finances, and matters such as the costs of war abroad, religion and foreign policy simply added to this central, strongest and most significant tension. Finance! ...read more.