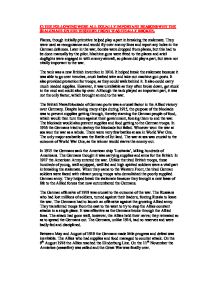 The following were all equally imortant reasons why the stalemate on the western front was finally broken.

C) THE FOLLOWING WERE ALL EQUALLY IMPORTANT REASONS WHY THE STALEMATE ON THE WESTERN FRONT WAS FINALLY BROKEN. Planes, though initially primitive helped play a part in breaking the stalemate. They were used as recognisance and would fly over enemy lines and report any holes in the German defences. Later in the war, bombs were dropped from planes, but this had to be done manually by the pilot. Machine guns were fitted to the planes and ariel dogfights were engaged in with enemy aircraft, so planes did play a part, but were not vitally important to the war. The tank was a new British invention in 1916. It helped break the stalemate because it was able to go over trenches, crush barbed wire and take out machine gun posts. ...read more.

In 1916 the Germans tried to destroy the blockade but failed. Whoever won the war at sea won the war as a whole. There were very few battles at sea in World War One. The only major sea battle was the Battle of Jut land. The war at sea was crucial to the outcome of World War One, as the winner would starve the enemy out. In 1915 the Germans sank the American ship 'Lusitania', killing hundreds of Americans. The Germans thought it was carrying supplies and arms for the British. In 1917 the American Army entered the war. Unlike the tired British troops, these hundreds of young, well equipped, well fed and high spirited soldiers were a vital part in breaking the stalemate. ...read more.

The Germans, unlike 1914, had no reserves and were badly fed and disciplined. Between May and August of 1918 the Germans made little progress and defeat was inevitable. The Allies who had supplies and food managed to counter attack. On the 8th August 1918 the Allies reached the Hinderburg Line. On the 11th November the Armistice (ceasefire) was called and the Great War was finally over. All of these factors played a role in breaking the stalemate on the Western Front. The use of planes and tanks helped break German defence lines. The influx of fresh American troops proved too much for the tired German troops. The war at sea played a vital role as it prevented supplies getting through the German troops and people. They are all interlinked in breaking the Stalemate on the Western Front. ...read more.