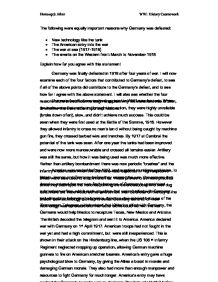 The following were equally important reasons why Germany was defeated. How far do you agree with these reasons?

The following were equally important reasons why Germany was defeated: * New technology like the tank * The American entry into the war * The war at sea (1917-1918) * The events on the Western front: March to November 1918 Explain how far you agree with this statement Germany was finally defeated in 1918 after four years of war. I will now examine each of the four factors that contributed to Germany's defeat, to see if all of the above points did contribute to the Germany's defeat, and to see how far I agree with the above statement. I will also see whether the four reasons alone are sufficient enough to explain why the stalemate was broken, or whether there are other important reasons. The main factor of new technology used in WW1 was the tank. When the tanks were first made and brought into action, they were highly unreliable (broke down often), slow, and didn't achieve much success. This could be seen when they were first used at the Battle of the Somme, 1916. However they allowed infantry to cross no man's land without being caught by machine gun fire, they crossed barbed wire and trenches. By 1917 at Cambrai the potential of the tank was seen. ...read more.

I think that America's entry into the war was very significant in defeating Germany, because although the American's entered the war at a late stage the war may have ended because America entered it. The German policy of unrestricted submarine warfare had backfired disastrously. Not only did it bring America into the war but it also failed to cripple Britain. The war at sea was again on the allied side. Although the German's had try to stop Britain's supplies using unrestricted submarine warfare, the British navy did something even more effective to cut off Germany's supplies, by setting up a naval blockade on Germany's ports. This prevented vital supplies such as food, oil, and weapons. This caused a major food crisis on the German home front. This lessened German morale and created division in German society (the rich were still living well, while the ordinary people of Germany were starving), this meant the German war effort was weakening. The war cannot be won without the support of the civilian population who produce the raw materials for the country. The discontent among the people spreads to those in the German navy. When the sailors were told that there would be one last campaign for glory, knowing that this campaign would be like suicide, they loused their ships boilers and refused to fight. ...read more.

But 8th August was the "Black Day" of the German army. This was the day that was crucial in showing the German's that victory for them would be impossible. Before the March offensive there was a unity of purpose with the Kaiser, the army and the home front, because everyone wanted to win the war. But by August 8th, there are really bad problems with German morale. Every time the British were attacking, German's surrendered, indicating that German morale was very low. General Ludendorff wrote, "I come to another point...the morale of the army. It is very important....The [41st] Division absolutely refused to fight on the 8th August; that was the black day in the history of Germany" The counter offensive was the final factor towards the defeat of Germany. The reasons for Germany's defeat are all interconnect. No one cause was, or could be decisive. New technology, America's entry into the war, the war at sea and the events on the Western front (March-Nov 1918), were all the causes of victory, but the events on the Western front (March-Nov 1918) was the most important. This is because all of the other three main factors contributed to it. But even though one factor may be the most important the combination of factors led to the defeat of Germany. Harnoop.S.Atkar WW1 History Coursework ...read more.