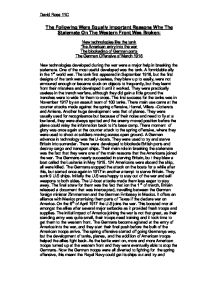 The following were equally important reasons why the stalemate on the Western Front was broken, New technologies like the tank, The American entry into the war, The blockading of German ports, The German Offensive of March 1918.

The Following Were Equally Important Reasons Why The Stalemate On The Western Front Was Broken: New technologies like the tank The American entry into the war The blockading of German ports The German Offensive of March 1918 New technologies developed during the war were a major help in breaking the stalemate. One of the most useful developed was the tank. A formidable ally in the 1st world war. The tank first appeared in September 1916, but the first designs of the tank were actually useless, they blew up to easily, were not armoured enough or became stuck on objects to frequently, but they learnt from their mistakes and developed it until it worked. They were practically useless in the trench warfare, although they did gain a little ground the trenches were to wide for them to cross. ...read more.

There were developed to blockade British ports and destroy cargo and transport ships. Their main role in breaking the stalemate was the fact that they were one of the main reasons that the Americans joined the war. The Germans nearly succeeded in starving Britain, but they blew a boat called the Lusitania in May 1915. 124 Americans were aboard the ship, all were killed. The Germans stopped the attack on the boats for a while after this, but started once again in 1917 in another attempt to starve Britain. They sunk 9 U.S ships. Initially the U.S was happy to stay out of the war and sell weapons to both sides. The U-boat attacks made them less eager to stay away. ...read more.

As the battle went on, more and more American troops turned up at the western front and they were eventually able to stop the Germans. Now the German troops were all diverted to fighting for the spring offensive, this meant the Royal Navy could get its ships out and try and blockade the German ports. The volume of U-boat attacks increased, so the blockades were stepped up and mines were laid around the German ports. Not only was this starving the German population and causing unrest, it also meant that the German troops did not have ready access to supplies. This was the final factor in breaking the stalemate. I believe that all 4 of the developments were as important as each other, because they all relied on each other in some way to break the stalemate. David Rose 11C ...read more.