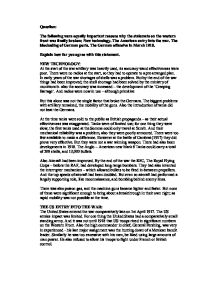 The following were equally important reasons why the stalemate on the western front was finally broken; New technology. The American entry into the war. The blockading of German ports. The German offensive in March 1918. Explain how far you agree.

Question: The following were equally important reasons why the stalemate on the western front was finally broken; New technology. The American entry into the war. The blockading of German ports. The German offensive in March 1918. Explain how far you agree with this statement. NEW TECHNOLOGY: At the start of the war artillery was heavily used, its accuracy wand effectiveness were poor. There were no radios at the start, so they had to operate to a pre arranged plan. In early years of the war shortages of shells was a problem. But by the end of the war things had been improved; the shell shortage had been solved by the ministry of munitions b- also the accuracy was increased - the development of the 'Creeping Barrage'. And radios were now in use - although primitive But this alone was not the single factor that broke the Germans. The biggest problems with artillery remained, the mobility of the guns. ...read more.

Also the high commander in chief, General Pershing, was very in experienced - his last major assignment was the hunting down of a Mexican bandit leader. Similarly he was too excessive with his men, be liked using large amounts of man power. He also refused to allow his troops to fight under French or British control. However the overall impact of the US army entering the war was very significant indeed. For example the economic impact; in the 1st years of the war the allies and the Germans produced roughly equal amounts of coal - 350million tonnes, steel - 58million tonnes, iron 50million tonnes. Once the Americans came in, the allies then had 841million tonnes of coal, and massively increased amounts of steel and iron. Also the US had a very big psychological impact as they now had a far larger military man power. The Germans were expecting American entry into the war. And Germany then realised that they could no longer have won the war by attrition. ...read more.

But the Germans never actually achieved a t full breakout and by march 31st their attack had been contained. In May there was another German attack, which again nearly succeeded. The road to Paris was open briefly, but was halted by the US troops shortly. By august 8th, the allies ordered a counter attack at Amiens, which broke the Germans, and they then fell. It wasn't a question of if the lose, but when. In the summer and autumn, Germany was pushed back, and by September the allies had reached Germanys own front line, the Hindenburg Line. By now technology had had an effect; radios and artillery were made much more effective, and aided the destruction of the Hindenburg line, also tanks were greatly improved. And by now the allied blockade was causing major shortages of food, and fuel etc. which lead to declining morale at the Front. The Germans lost 400,000 men as a result of the Spring Offensive. ...read more.