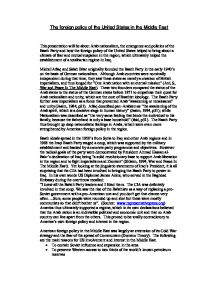 The foreign policy of the United States in the Middle East.

The foreign policy of the United States in the Middle East This presentation will be about Arab nationalism, the emergence and policies of the Baath Party and how the foreign policy of the United States helped to bring about a climate of fear and mutual suspicion in the region, which ultimately helped the establishment of a totalitarian regime in Iraq. Michel Aflaq and Salah Bitar originally founded the Baath Party in the early 1940's on the basis of German nationalism. Although Arab countries were nominally independent during that time, they saw these states as merely a creation of British imperialism, and thus longed for "One Arab nation with an eternal mission" (Avi, S, War and Peace In The Middle East). These two founders compared the status of the Arab states to the status of the German states before 1871 to empathise their quest for Arab nationalism and unity, which are the core of Baathist ideology. The Baath Party further saw imperialism as a force that prevented Arab "awakening or renaissance" and unity (Jasim, 1984, p31). Aflaq described pan-Arabism as "the awakening of the Arab spirit, which is a decisive stage in human history" (Jasim, 1984, p31); while Nationalism was described as "the very same feeling that binds the individual to his family, because the fatherland is only a base household" (ibid, p31). ...read more.

ourselves the question why the United States specifically supported a regime, whose goals were totally opposed to the last two American principles. The Soviet Union saw America's influence in the region as a serious liability to its own national interests. Moscow's Minister of Foreign Affairs justified the Soviet Union's concern by stating "the United States was not even in close proximity to the region, yet it influenced the balance of power within that region". (Virth, p15, 1984) Ultimately America's association with Saddam Hussein and the Baath regime can best be traced back to its obsession with the containment of Communism by urging coups against pro-Soviet governments and offering military aid to the countries opposing Communism, although these arms eventually would be turned against the US. The House Select Committee on Intelligence Activities gives a wonderful example of US twists in foreign policy and relations in its report. Even during the Baath Parties rule, the US encouraged Kurds in the north to rise up against the Baath Party, because it had severed its relationship with the shah of Iran, another US key ally for a certain period of time. What later happened is best described by quoting from the report of the Committee. "Documents in the committee's possession clearly show that the president, Dr Kissinger, and the shah hoped that the Kurds would not prevail. ...read more.

It is estimated that more than $10 billion worth of weapons were sold to Iran between 1972 and 1976. US Secretary of State Henry Kissinger saw Iran as "a pillar of stability in a turbulent and vital region. We now provide bank loans to assist Iran in purchasing both military equipment and services in the US". (Jasim, 1984, p56) In addition Iran cooperated with other American allied countries in the region, including Israel and Turkey, under the shah. This ultimately added to the already deep resentment in the Arab world of both the Iranian Shah and the United States for its policies. This deep suspicion would ultimately lead to the First Gulf War, which not only reshaped the whole Middle East Region, but also had tremendous consequences for the rest of the world. To thus revisit why the majority of people, including many in the Western world, supported Saddam Hussein and its party, it is important to look at the resurrection of Arab nationalistic feelings particularly after the Six Day War in 1967, which led to a humiliating defeat of the Arab world. This as well as American foreign policy of unconditional support for Israel and the creation and abandonment of allies, when they go past their use by date, helped bring about a totalitarian regime in Iraq. This regime, which was supported by Arabs and the West alike, eventually brought great misery and suffering to its people and others in the region. ...read more.