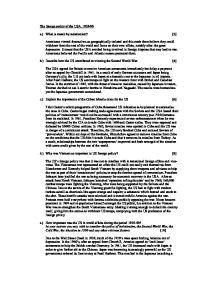 The foreign policy of the USA, 1929-90 a.) What is meant by isolationism? [2] Americans viewed themselves as geographically isolated and this made them believe they could withdraw from the rest of the world and focus on their own affairs, notably after the great depression. It meant that the USA avoided being involved in foreign disputes that may lead to war. Americans believed the Pacific and Atlantic oceans protected them. b.) Describe how the US contributed to winning the Second World War. [4] The USA agreed for Britain to receive American armaments immediately but delay a payment after an appeal by Churchill in 1941. As a result of early German successes and Japan being Germany's ally, the U.S cut trade with Japan at a dramatic cost to the Japanese in oil imports. After Pearl Harbour, the US sent troops to fight on the western front with British and Canadian forces. In the summer of 1945, with the threat of massive casualties, caused by Japanese invasion, Truman decided to use 2 atomic bombs in Hiroshima and Nagasaki. The results were horrendous yet the Japanese government surrendered. ...read more.

These horrific attacks were televised and it turned middle America against the war. Protests were held everywhere with famous celebrities publicly opposing the war. Nixon became president in 1969 and to popularise himself amongst the US public, his solution to the Vietnam War was to strengthen the South Vietnamese army. Making it strong enough to defend the country itself, giving him the excuse to withdraw US troops, complying with the US preference of the foreign policy. e.) How important was the US in world affairs during the period 1929-90? In your answer you may wish to consider the policy of isolationism, the Second World War, the Cold War, the situation in 1990 and any other relevant factors. [10] Due to the Wall Street Crash in 1929, much of the 1930's were spent hurling America out of depression. In the 1940's, after an appeal from Churchill, America agreed to 'lend-lease' armaments to help the British combat Germany. In 1941, the US decreased trade with Japan in order to give further aid to the Chinese. Japan was becoming increasingly powerful so the US government ordered its fleet to stay at Pearl Harbour. ...read more.

In 1981, Reagen returned to an aggressive anti-Soviet foreign policy but by 1989, the Soviet Union collapsed, posing less of a threat to communist rule of America, ending the cold war. Nixon and Watergate: He made use of the previous governments problems with law and order to secure an honourable withdrawal from Vietnam. His appeal was to the middle classes that didn't favour reform. Didn't change the civil rights legalisation and changes to the social security system, health and education came from congress. 1972, TIME voted Nixon 'man of the year'. He was a republican. . Burglars arrested in Democratic Party Offices. . All worked for CREEP (re election of republican president) . Nixon denies involvement . After finding out that people who worked for him were directly involved, Nixon gives them each $1m hush money. . Nixon uses presidential powers to try and block investigations by the police, Justice department and US Congress. . Media play big role in exposing the cover-up by demanding tape recordings of the president's conversations. . Tapes handed but there are gaps. . Nixon supplies transcripts of the missing tapes and the public is shocked by Nixon's language and sounded more like a gangster. . Resignation and pardon in august 1974 ...read more.