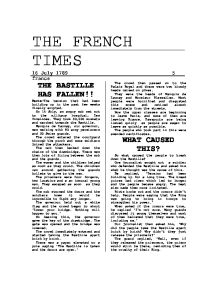 THE FRENCH TIMES 16 July 1789 5 francs THE BASTILLE HAS FALLEN!! Paris-The tension that had been building up in the past few weeks finally erupted. On 14 July, an angry mob set out to the military hospital, Les Invalides. They took 30,000 muskets and marched towards the Bastille. Marquis de Launay, our governor, was waiting with 80 army pensioners and 30 Swiss guards. The crowd entered the courtyard through the porch and some soldiers joined the attackers. The mob then hacked down the chains of the drawbridge. There was then lots of firing between the mob and the guards. The women and the children helped as much as they could. ...read more.

The gate was opened and the bridge was lowered. The crowd immediately entered and started taking the Bastille apart brick by brick. There was a paper elevated on a pole saying 'The Bastille is taken and the doors are open.' The crowd then passed on to the Palais Royal and there were two bloody heads raised on pikes. They were the heads of Marquis de Launay and Monsieur Flesselles. Most people were horrified and disgusted this scene and retired almost immediately from the streets. Now the upper classes are beginning to leave Paris, and some of them are leaving France. Passports are being issued quicly as people are eager to leave as quickly as possible. The people who took part in this were awarded certificates. WHAT CAUSED THIS? ...read more.

When asked if the rumors were true, he replied 'I'm not sure. Many guards discussed it among themselves and most of them believed that they were true, including me.' Our journalist then asked him, 'Why did the people take the Bastille apart brick by brick? Why didn't they just release the prisoners?' The guard replied, 'Well, even if they released the prisoners, the prison would still be there, reminding them of the cruelty of their King. The prisoners weren't even important. The important fact was that the Bastille symbolized cruelty and hardship on the people.' So that is what a guard of the Bastille thought of the attack. It is clear that everyone is glad that the Bastille has fallen, and the people are victorious. A painting showing the mob attacking the Bastille by Jackson J. Spielvogel ...read more.