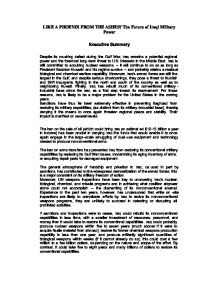 LIKE A PHOENIX FROM THE ASHES? The Future of Iraqi Military Power Executive Summary Despite its crushing defeat during the Gulf War, Iraq remains a potential regional power and the foremost long-term threat to U.S. interests in the Middle East. Iraq is still committed to acquiring nuclear weapons -- it will continue to do so as long as President Saddam Hussein and his regime survive -- and probably retains a residual biological and chemical warfare capability. Moreover, Iraq's armed forces are still the largest in the Gulf, and despite serious shortcomings, they pose a threat to Kurdish and Shi'i insurgents fighting in the north and south of the country as well as to neighboring Kuwait. Finally, Iraq has rebuilt much of its conventional military-industrial base since the war, as a first step toward its rearmament. For these reasons, Iraq is likely to be a major problem for the United States in the coming years. Sanctions have thus far been extremely effective in preventing Baghdad from restoring its military capabilities, (as distinct from its military-industrial base), thereby denying it the means to once again threaten regional peace and stability. ...read more.

Iraq will bring to this effort a detailed understanding of how to exploit the limitations of the UN's monitoring and verification efforts, conceal its activities from foreign intelligence agencies, and minimize the effects of bombing on facilities and equipment. The collapse of the Soviet Union may provide Iraq with unprecedented opportunities to acquire fissile material (weapons grade uranium or plutonium) and expertise with which to produce nuclear weapons, despite sanctions and inspections. Iraq also retains a residual biological and chemical warfare capability. It has the know-how to produce biological and chemical weapons and it is believed to have saved critical production equipment as well as seed stocks for producing biological agents. Iraq could probably produce biological agents at this time, despite sanctions and inspections, and given the opportunity it would almost certainly revive its chemical warfare program. It might also still have hidden stocks of biological and chemical agents produced before the Gulf War that it is saving for future contingencies. Finally, Iraq may have a scores of al-Husayn missiles that could provide a long-range delivery capability for stocks of biological or chemical agents which it may still possess. ...read more.

Iraq will constitute a potential threat to U.S. interests and allies as long as Saddam Hussein and his regime remain in power. Consequently, U.S. policy should actively seek the overthrow of Saddam Hussein and his regime, while aiming to contain Iraq by: Maintaining sanctions in order to deny Iraq the means to rebuild its military capabilities, and thereby undercut its ability to threaten regional peace and stability. Retaining a military presence in the region to deter Iraq and underscore the U.S. commitment to defend Kuwait and the Kurdish enclave against aggression. Maintaining the Gulf War coalition in order to preserve the viability of the military option in the Gulf and ensure the continued effectiveness of sanctions. Because Iraq has traditionally played a role in both the Persian Gulf and Arab-Israeli arenas, the costs of failing to prevent its rearming are potentially very high. At stake are regional peace and stability, the Arab-Israeli peace process, the security of Persian Gulf oil, the future of regional arms control, and the achievements of the Gulf War -- won at great expense and risk. For these reasons, the containment of Iraq-through deterrence and sanctions -- must remain a cornerstone of U.S. policy toward the region for as long as the current regime remains in power. ...read more.