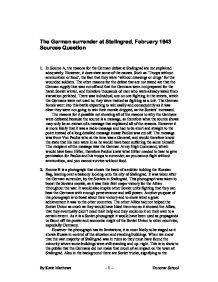 The German surrender at Stalingrad, February 1943 Sources Question 1. In Source A, the reasons for the German defeat at Stalingrad are not explained adequately. However, it does state some of the causes. Such as 'Troops without ammunition or food', the fact that they were 'without dressings or drugs' for the wounded soldiers. The other reasons for the defeat that are not stated are that the German supply line was cut off and that the Germans were not prepared for the harsh Soviet winter, and therefore thousands of men who were already weak from starvation perished. There was individual, one on one fighting in the streets, which the Germans were not used to; they were trained as fighting as a unit. The German forces went into this battle expecting to win easily and consequently as it was clear they were not going to win their morale dropped, as the Soviets' increased. The reasons for it possible not showing all of the reasons to why the Germans were defeated because the source is a message, so therefore what the source shows may only be an extract of a message that explained all of the reasons. However it is more likely that it was a radio message and had to be short and straight to the point instead of a long detailed message incase Paulus was cut off. The message was from Von Paulus who at the time was a General, and would therefore know the state that his men were in as he would have been suffering the same himself. The recipient of the message was the German Army High Command, which would have been Hitler, therefore Paulus knew what Hitler needed to hear to give permission for Paulus and his troops to surrender, as you cannot fight without ammunition, and you cannot survive without food. 2. Source B is a photograph that shows the back of a soldier holding the Russian flag, leaning over a balcony looking onto the city of Stalingrad. ...read more.

Source F is written by a Soviet, consequently having the opposite view to a German, they would be proud of their victory and therefore would want to brag about how many Germans they killed and how many they captured. It goes into detail about how they 'surrounded German- Fascist troops'; it's a negative viewpoint towards the German. Source F was written in the 1960s, therefore nearly twenty years after the German defeat at Stalingrad had happened. Also during this period was the Cold War, so the Soviets would want it to appear that they defeat the Germans on their own with little help from the other Allies. The audience of Source F would have been Soviet school children as it is written for a textbook, therefore they would want to make their children proud of their for-fathers and their country, this was done by adding in all the facts and figures. Apart from the above reasons the sources may be different because for Source E there may have been a lack of information available for the person reading the broadcast. The information would have come from the government, which would have been censored. There are no facts or figures stated about the loss of men, this may be because of censorship or it was too early after the defeat to calculate the numbers. However if the numbers were available they would not have been used to protect the civilians from the sheer scale of the defeat. Source F, does not give the number of Soviet casualties or the number of Germans that eventually returned, it is only focussing on the positive achievements made by the Soviets. Although historians usually give balanced views, the information given could have biased in the first place. As the Soviet Union was a totalitarian state everything would have been censored, yet due to the time gap some information may have been released. ...read more.

The purpose for the battle at Stalingrad for the Germans was so they could access the oil at the Caucuses. If the oil was available to the Germans it would have meant that she could have withstood a prolonged was, without having to depend on Romanian oilfields which were vulnerable to attack by Russian bombers. So as a medium-term consequence the Germans would have been short of oil and therefore not being able to withstand a long-lasting war. The defeat also meant that because of the loss of life the Germans could never again strike again on the Eastern Front. However it was not until the Germans lost in the battle of Kursk against the Russians that they were pushed back, and forced out of the Soviet Union. The defeat obviously had an impact of the German soldiers and their commanding officers; they lost faith in Hitler's ruling and felt he was not listening. During the battle at Stalingrad General Paulus was pleading with 'immediate permission to surrender in order to save lives of remaining troops' as displayed in Source A which is a message from Paulus to Hitler. So with the fallen morale due to the loss of life and defeat at Stalingrad, now as well' there were no doubts among civilians and military circles ...a mad corporal whose lucky gambles were no longer paying off' shown in Source H, that the people's confidence in Hitler was wearing away. At the time, February 1943, the defeat of the Germans at Stalingrad was important to both the Russians and the Germans, but after time had past the Germans only remember the tragic events of Stalingrad, whereas the Russians used it to their advantage, for example during the years of the Cold War. Although not all the Sources support my view, I still believe that the Nazi defeat at Stalingrad was more important to the Russians as it had long term effects whereas it only effected the Germans at that time and non there after. Words: 3,670 By Katie Matthews - 1 - Dunottar School ...read more.