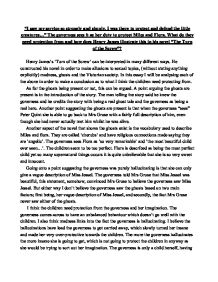 The governess sees it as her duty to protect Miles and Flora. What do they need protection from and how does Henry James illustrate this in his novel &quot;The Turn of the Screw&quot;?

"I saw my service so strongly and simply. I was there to protect and defend the little creatures..." The governess sees it as her duty to protect Miles and Flora. What do they need protection from and how does Henry James illustrate this in his novel "The Turn of the Screw"? Henry James's 'Turn of the Screw' can be interpreted in many different ways. He constructed his novel in order to make allusions to sexual topics, (without stating anything explicitly) madness, ghosts and the Victorian society. In this essay I will be analysing each of the above in order to make a conclusion as to what I think the children need protecting from. As for the ghosts being present or not, this can be argued. A point arguing the ghosts are present is in the introduction of the story. The man telling the story said he knew the governess and he credits the story with being a real ghost tale and the governess as being a real hero. Another point suggesting the ghosts are present is that when the governess "sees" Peter Quint she is able to go back to Mrs Grose with a fairly full description of him, even though she had never actually met him whilst he was alive. ...read more.

also "locked away" in the sense that they had little freedom in such a small village as Bly, within the metaphors of a gothic fiction. Therefore, I think that "The Turn of the Screw" has been written as a gothic fiction because James intended to create fear and tension. Although his novel creates fear and tension, I also think he was relating his novel to the Victorian society. The Victorian society and gothic fiction are linked as they come from the same backgrounds, when discussing sexual topics, fear and tension. So again, henry James used this to his advantage in writing the novel ambiguously. The language used in "The Turn of the Screw" illustrates ambiguity, which creates tension throughout this novel. It was the governess who gave Douglas a manuscript of her experiences. Douglas read the story aloud at the gathering in the introduction. The narrator of the introduction transcribes the story years later. The narrative alone and the introduction are in the first person perspective. The identity if the "I" in the narrative remains ambiguous. It is also debatable whether the ghosts actually exist because the governess is not necessarily a reliable narrator. From the beginning of "The Turn of the Screw", a sense of mystery fills the novels language. ...read more.

She comes across to be sexually repressed and mentally unstable. If the governess saw Peter Quint, I think it slowly turned her insane, or made her get carried away, and end with her believing she saw Miss Jessel. Either way I do not believe there was a ghost of Miss Jessel or Peter Quint. With the governess, I have found that she likes to create things or over imagine, for example, when she sees Miles looking up she instantly is convinced he is not looking at her, but just above her and at a person and that person is Quint. Could the governess be 100% sure that Miles was looking above her and not at her? As I think the governess is mentally unstable, the next step I see her taking is protecting her sexuality and safety. The governess produces an "image" which is the female ghost of Miss Jessel. This allows Peter Quint and Miss Jessel to be sexually involved and the governess protecting herself. This leaves me to say, that the ghosts are a part of the governesses imagination. I think this because I do not find the governess a reliable narrator. If anything the children need protecting from it is from the governess and her unstability. I think this is what brought about her unbalanced behaviour. ?? ?? ?? ?? ...read more.