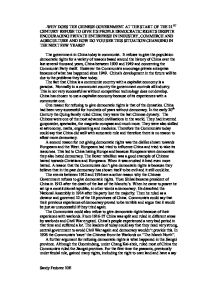 The government in China today is communist.

-WHY DOES THE CHINESE GOVERNMENT AT THE START OF THE 21ST CENTURY REFUSE TO GIVE ITS PEOPLE DEMOCRATIC RIGHTS DESPITE ENCOURAGING PRIVATE ENTERPRISE IN INDUSTRY, COMMERCE AND AGRICULTURE AND HOW DO YOU SEE THIS SITUATION CHANGING IN THE NEXT FEW YEARS? The government in China today is communist. It refuses to give the population democratic rights for a variety of reasons based around the history of China over the last several thousand years, China between 1900 and 1949 and concerning the Communist Party itself. However the Communists encourage private enterprise because of what has happened since 1949. China's development in the future will be due to the problems they face today. The fact that China is a communist country with a capitalist economy is a paradox. Normally in a communist country the government controls all industry. This is not very successful as without competition technology does not develop. China has chosen to use a capitalist economy because of its experiences with a communist one. One reason for refusing to give democratic rights is that of the dynasties. China had been very successful for hundreds of years without democracy. In the early 20th Century the Quing family ruled China; they were the last Chinese dynasty. The Chinese were one of the most advanced civilisations in the world. They had invented gunpowder, spectacles, the magnetic compass and much more. They were also skilled at astronomy, maths, engineering and medicine. ...read more.

This project is to dam the Yangtze River. The building of this dam will produce a smooth, navigable river for trading vessels, it will prevent devastating floods damaging 400 million homes and 70% of China's rice crop every few years. It will also create an amazing 18thousand megawatts of hydro-electricity. However, there is plenty of opposition to this plan because it will flood 140 towns and thousands of villages and will involve the forced removal of millions of people. The communists argue that such an important project could not be passed in a democratic country. Government in China, although being communist, encourages a capitalist economy. One reason why it might do this is due to the failure of the Great Leap Forward. This was a plan to become one of the world's leading industrial nations and improve agriculture. This was to be done by organising people into 'communes'. Families gave up everything they owned to common ownership. The policy of 'Communes' lead to widespread starvation. Another part of the Great Leap Forward was the Backyard Steel Campaign. This was the building of over 600 thousand furnaces in villages to create steel. The Great Leap Forward failed after only a few months. Old machinery fell apart after being pushed too hard and workers fell asleep at their benches. The Backyard Steel Campaign failed; 3 million out of every 11 million tons of steel produced was too impure to use and was scrapped. ...read more.

In order to tackle these major and complex problems China's leaders will need to keep a reasonably tight control over the population, whilst encouraging private enterprise. All of this means that China may stay as it is currently. China may also revert back to a stricter authoritarian state. This would happen if Wen was seen by the hard liners as not solving the problems (listed above) that China faces, and increasing discontent amongst rural farmers and the unemployed, they may well take control. Wherever and whenever there is a power vacuum it is filled, as in the former USSR where the mafia now control large parts of political and economical aspects of society. When there is a change from a strictly autocratic government to a more liberal or democratic one, there is an explosion in lawlessness, as witnessed in Iraq. This would mean China becoming more hard line Communist. It can be seen that there are many and complex reasons why the Communists could justify that there is no present need for greater democracy in China. These reasons include not only their historical development during the dynastic and feudal period but also the more recent events during the 20th century, social transformation from a dynastic and feudal system through several phases of Communist and autocratic rule to very gradual opening and re-emergence of the country to the influence of world market and more liberal governmental systems. The only certainty is that of the short term future, in that it appears that Wen has no intention of creating a democratic system but will continue with a more liberal but autocratic system. Sandy Fedorec 10E ...read more.