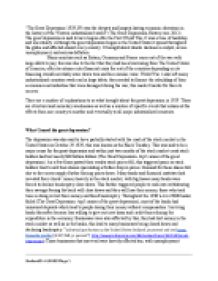 The Great Depression, causes and effects.

﻿?The Great Depression (1929-39) was the deepest and longest-lasting economic downturn in the history of the Western industrialized world? (The Great Depression-History.com 2012). The great depression is said to have begun after the First World War, It was a time of hardship and uncertainty. Although the great depression began in the United States it spread throughout the globe and affected almost every country. It brought about drastic declines in output, severe unemployment, and serious deflation. Many countries such as Britain, Germany and France came out of the war with large debts to pay, this was due to the fact that they had been borrowing from The United States of America, after its entrance into financial crisis the rest of the countries depending on its financing would inevitably enter down turn and face similar crisis. World War 1 also left many industrialized countries weak and in large debts, they needed to finance the rebuilding of their economies and industries that were damaged during the war, this made it harder for them to recover. There are a number of explanations to as what brought about the great depression in 1929. These are structural and monetary weaknesses as well as a number of specific events that enhanced the effects from one country to another and eventually to all major industrialized countries. What Caused the great depression? The depression was also said to have partially started with the crash of the stock market in the United States on October 29 1929, this was known as the Black Tuesday. ...read more.

In the Soviet Union Joseph Stalin took control without being elected, he set up a five year plan to recovery by industrialization of state controlled firms, everything was produced to as the government?s desire. The effects of the great depression were also severe in other countries. United Kingdom was still recovering from the effects of World War 1 which ended in 1919 when the great depression started in the United States of America and started spreading across borders to other countries. In April 1925 Winston Churchill restored the Sterling to the gold standard at the prewar rate, this made the sterling convertible to its value in gold. However it made British exports more expensive on the world market thus reducing the amounts of exports which in turn reduced the level of economic growth. As the demand for exports fell industries started cutting down costs to become more competitive by cutting workers? wages which lead to a less equality and increasing unemployment. After the stock market crash in America there was a decrease in global trade and commodity prices. Countries and there governments were in financial troubles and the only country that had the ability to lend money was now in a crisis too, thus leaving them with no creditor. To protect their markets and industries governments started creating international trade barriers and tariffs which had a big effect on British industries. As demand for British goods fell demand for labor with in Britain fell too thus further increasing the levels of unemployment. ...read more.