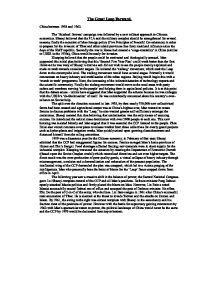 The Great Leap Forward. China between 1958 and 1962. The 'Hundred flowers' campaign was followed by a new militant approach to Chinese economics. Shaoqi believed that the PLA and the military complex should be strengthened for several reasons; firstly the rejection of Mao foreign policy (Five Principles of Peaceful Co-existence) in order to prepare for the invasion of Tibet and other island provinces free from mainland influence since the days of the KMT republic. Secondly the war in Korea had created a 'siege-mentality' in China (similar to USSR in the 1930s), China would be ready for invasion. Xiaoping believed that the people could be motivated and ideologically aroused. Mao supported this initial plan believing that this 'Second Five Year Plan' could work better than the first. ...read more.

The split over the direction occurred in late 1958, by then nearly 750,000 new collectivised farms had been created and agricultural output was at China's highest ever, Mao wanted to create forums to discuss problems with the 'Leap,' he also wanted greater self-sufficiency amongst the communes. Shaoqi resisted this idea believing that centralisation was the only means of ensuring success. He introduced the radical mass dormitories with over 5000 people to each one. This new housing was resisted bitterly and Mao argued that it was essential the CCP listened to the people. Zhou Enlai also voiced concerns over plans to release worker from these collectives for overly grand projects such as hydro-plants and irrigation works. Mao quickly seized upon growing disenchantment and distanced himself from the ruling committee. ...read more.

Defence minister Peng Dehuai openly attacked Maoist policies and firmly placed the blame on Mao. However, Lin Baio a noted Maoist successfully ousted Dehuai out of office and accepted the post of Defence minister. He offers Zhu De the post of C-in-C of the army, who declines. Lin Baio resigns in 1961 after China's successful total annexation of Tibet. He is alarmed at the threat to invade Taiwan and the attacks on Jinmen and Mazu. By 1961, the swing to the right was almost complete with Shaoqi in the ascendancy and his fraction most of the positions of power. However with the battle for supremacy gaining momentum by 1962 with Mao's spectacular return to power, the political landscape of China would never be the same and the CCP by 1970 would be decimated from top to bottom. ...read more.