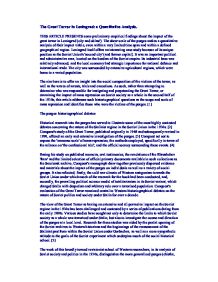 The Great Terror in Leningrad: a Quantitative Analysis.

The Great Terror in Leningrad: a Quantitative Analysis. THIS ARTICLE PRESENTS some preliminary empirical findings about the impact of the great terror in Leningrad (city and oblast'). The sheer scale of the purges makes a quantitative analysis of their impact viable, even within a very limited time span and within a defined geographical region. Leningrad itself offers an interesting case study because of its unique position as the Soviet Union's 'second city' (and former capital). It was an important political and administrative area, located on the borders of the Soviet empire. Its industrial base was relatively advanced, and the local economy had strategic importance for national defence and international trade. The city was surrounded by extensive agricultural regions, which were home to a varied population. The aim here is to offer an insight into the social composition of the victims of the terror, as well as the waves of arrests, trials and executions. As such, rather than attempting to determine who was responsible for instigating and perpetuating the Great Terror, or examining the impact of mass repression on Soviet society as a whole in the second half of the 1930s, this article addresses such historiographical questions as the scope and scale of mass repression and identifies those who were the victims of the purges. [1] The purges: historiographical debates Historical research into the purges has served to illustrate some of the most highly contested debates concerning the nature of the Stalinist regime in the Soviet Union in the 1930s. [2] Conquest's study of the Great Terror, published originally in 1968 and subsequently revised in 1990, offered an early and extensive investigation of the purges. [3] Conquest set out to expose the 'immense scale' of mass repression, the methods employed, specifically in terms of the reliance on 'the confessional trial', and the official secrecy surrounding these events. [4] Basing his study on published memoirs, oral testimonies, the revelations of the Khrushchev 'thaw' and the limited selection of official primary documents available in such collections ...read more.

[24] Women constituted less than 15% of the party membership in the later 1930s. [25] In contrast to the first wave of the Great Terror (from the summer of 1936 to the summer of 1937), the victims of the purges during the second wave (from summer 1937 to spring 1938), in relative terms at least, were far less likely to have been drawn from local and party elites. However, it is important to recognise that, despite the fact that the victims of the terror during the second wave encompassed a broader social spectrum, Communist Party members were still purged in a greater proportion than their weighting amongst the Soviet population as a whole. Of the 673 individuals in the larger dataset under analysis here, 44 (approximately 6.5%) were or had beep members of the party at the time of their arrest. Eight of the 297 women (2.7%) were party members and they had all joined the party since the revolution. One of the purge victims, Vladislav Aleksandrovich Pruss, is recorded as having joined the Social Democrats in 1899; Viktor Yakovlevich Baier joined in 1905; and Ignatii Petrovich Nezhinsky joined in 1911. All of the others had joined the Communist Party during or after 1917. [26] Seven of the dataset had left or been expelled from the party before their arrest. Although no reason is given in the source for leaving the party, these were all recorded as having relinquished membership in either 1935 or 1936, that is after the murder of Kirov on 1 December 1934. [27] Nationality Despite the fact that only 58.39% of the entire Soviet population in 1939 was ethnically Russian, the population of the Leningrad region was predominantly Russian (88.79%), as was the case with the RSFSR as a whole (82.5%). See Table 3. The data drawn from the Leningradskii Martirolog demonstrate that ethnic Russians were purged in proportion more with their Union-level weighting than their representation amongst the republican or local populations: 63% of the larger dataset of purge victims and just over 69% of the women were ethnic Russians. ...read more.

Broader kinship relationships are not easy to determine from the limited information provided by the Lenin gradskii Martirolog but these too can be surmised from the available data. Conclusions It is evident from the preliminary analysis of the listings contained in Lenin gradskii Martirolog, 1937-38 that the second wave of the great terror extended far beyond the Communist Party members and other elite personnel in the higher echelons of Soviet power, who had provided the main focus of the early stages of the purges in this period. During the second wave of the terror the purges had a wider impact and included former kulaks, the national minorities and religious personnel. In this respect there is considerable evidence to support the argument that mass repression was geared towards the destruction of a potential 'fifth column'. Yet this does not provide a complete picture. From the preliminary data outlined here, there is evidence to suggest that the second wave of the purges may also be seen partly as a social cleansing exercise. To some extent the purges, possibly in a bid to meet strictly determined quotas in a short period of time, also targeted those who were not actively engaged in actual or potential opposition to Stalin's policies, or the Soviet regime more generally, but who did not fit into the new Soviet way of life and were therefore regarded as easily dispensable by local authorities. [41] These were people who could be regarded as 'anti-Soviet' elements in only the broadest interpretation of its meaning. They might be classified in other terms as socially marginal individuals and groups, and may have included known criminals. They were often vulnerable and little able to resist arrest, such as the elderly and infirm, vagrants, hospital residents and the otherwise unemployed. The case of the oldest victim in the datasets exemplifies this argument: Aleksandr Aver'y anovich Bibiksarov was 78 years old and homeless when he was arrested on 10 August 1937 under article 58-10 of the criminal code. He was placed on trial on 13 September and executed the same day. ...read more.