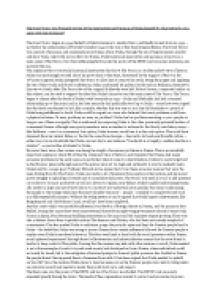 The Great Terror was Primarily Driven by the Insecurities and Paranoia of Stalin himself. To what extent do you agree with this statement?

﻿The Great Terror was Primarily Driven by the Insecurities and Paranoia of Stalin himself. To what extent do you agree with this statement? The Great Terror began in 1934, fuelled by Stalin?s decision to murder Kirov, and finally wound down in 1939 ? not before the authorisation of Trotsky?s murder (1940) who was at this time living in Mexico. The Great Terror was a period of paranoia and assassinations in Russia, where Stalin, through the use of imprisonment, murder and show trials, ruled with an Iron fist over Russia. Stalin?s personal insecurities and paranoia is known as a main cause of the Terror, but other influencing factors, like the power of the NKVD and economic pressures, also powered this era. The argument that it was Stalin?s personal insecurities that drove The Terror is a traditionalist?s view of history. Stalin was increasingly worried about his power base at this time, threatened by the support of Kirov in the 17th party congress; Stalin instigated The Terror to allow him to remove his rivals. Using the purges and applying the use of show trials and forced confessions, Stalin condemned his political rivals such as Bukharin, Kamenev & Zinoviev to death. After The Terror few of the original Bolsheviks were left. Robert Service, a respected author on this subject, can be cited to support the idea that Stalin?s character was the main cause of The Terror. ...read more.

The Terror was used as a tool to add pressure on workers to be more productive as well as a device to explain away failure. Stalin?s rapidly modernising Russia also needed a large amount of slave labour to construct new industrial areas quickly, this meant condemning thousands to the Gulags which kept the most valuable ?resource? ? people ? available to complete forced work in a fully expendable manner. Without the Gulag system it can be agreed that Stalin?s great achievements, like Magnitogorsk and the Belamor Canal, would not have been completed. Another cause which was incredibly influential was the fear of foreign threats in Russia, and the paranoia they fuelled. During the 1920s there were many external threats from right-wing governments abroad: Fascist Italy, Franco in Spain, Nazi Germany building momentum in the 1930s and the Japanese empire growing. There was also a distinct threat from ?capitalist nations? like America and Britain, who had been notoriously sceptical of communism. This fear pushed Stalin to militarise, purge the party for spies and kept the Russian people loyal to Stalin ? the belief that Stalin was acting to protect Russia from outside influenced allowed the Russian people to explain away Stalin?s merciless behaviour. This fear went hand in hand with the social pressures within Russia, social upheaval experienced through forced collectivisation and industrialisation meant that the state found it harder to keep control of the public. ...read more.

This is a hybrid theory of historical analysis, and was common within the 1990s. This is because it was Stalin?s totalitarian rule and distinct paranoia of his fellow party members which tipped the scales towards The Great Terror, not to forget that it was Stalin?s own signature that appeared on over 600,000 death warrants. Unlike other dictators, like Hitler who had different autonomous factions working under him all vying to earn his approval, Stalin wanted complete control over Russia. He kept involved in all aspect of governing Russia and undercut officials who looked like they were able to sway public opinion. However economic problems also had its influence on the cause of The Terror, they fed into Stalin?s paranoia and need to look successful. Failure within the 5 Year Plans would have opened Stalin up to criticisms from other nations, with paranoia from other strong competing countries which had previously considered Russia as a backwards peasant nation on his heels, Stalin needed to project the image of success; The Terror was a means of scapegoating millions for the lack of productivity and created thousands of expendable workers from the Gulags. In summary, Stalin?s personal insecurities were the main cause of The Terror. Without Stalin at the helm The Great Terror would never had happened, however social pressures, the economy and foreign all fuelled Stalin?s need to motivate Russia ? in which he reacted in the way most close to his nature: violence, fear and control. ...read more.