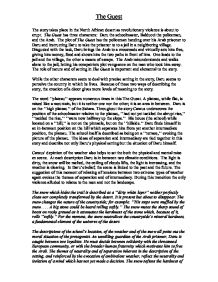 The Guest The story takes place in the North African desert as revolutionary violence is about to erupt. The Guest has three characters: Daru the schoolmaster, Balducci the policeman, and the Arab. The plot of The Guest has the policeman handing over his Arab prisoner to Daru and instructing Daru to take the prisoner to to a jail in a neighboring village. Disgusted with the task, Daru brings the Arab to a crossroads and virtually sets him free, giving him money, food and shows him the two paths in front of him. One leads to the jail and the village, the other a means of escape. The Arab misunderstands and walks alone to the jail, letting his compatriots plot vengeance on the man who took him away. The role of nature and of setting in The Guest is important and elemental to the story. While the other characters seem to deal with precise setting in the story, Daru seems to perceive the country in which he lives. Because of these two ways of describing the story, the creation of a d�cor gives more levels of meaning to the story. ...read more.

In Daru's belief, the scene is linked to the past and the future. The suggestion of this moment of relaxing of tensions between two extreme types of weather again evokes the themes of separation and of intermediacy. During this transition the only violence alluded to relates to the men and not the landscape. The snow which hides the trail is described as a ''dirty white layer'' neither perfectly clean nor completely transformed by the desert. It is present but about to disappear. The snow changes the nature of the countryside; for example: ''His steps were muffled by the snow. . . . A big stone could be heard rolling softly.'' The snow mutes the sharp sound of boots on rocky ground as it attenuates the harshness of the stone which, because of it, rolls ''softly.'' For the moment, the snow neutralizes the countryside's mineral hardness, a fundamental element of the universe of the desert. The descriptions of the school's location, of the weather and of the snow all point out the moral situation of the protagonist. ...read more.

The similarity between his guest and the countryside plays a prophetic role; because of his refusal to join with the Arab, Daru loses the countryside. Even the gesture which accompanies the decision, the throwing of the stone, indicates that he has set in motion a mechanism which, in the end, exiles him from the country he loves. The structure of the short story increases the value of the motif of inhumanity inherent in the presentation of the decor. Joy emanates from nature when Daru is joyful, but it also emanates from it when he is profoundly unhappy, overwhelmed by solitude. Daru has gambled on nature instead of on men. He has lost the help which human solidarity offers. The feeling of perfect union with the desert, a countryside after his own heart, has proven to be an illusion. From a certain point of view, this short story, published in 1957, states in esthetic terms one of the essential ideas concerning Camus's vision of nature, an idea which he formulated as early as 1937 in The Wrong Side and the Right Side: nature, an independent entity, does not lend itself to the schemes of man. ...read more.