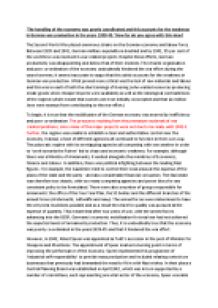 The handling of the economy was poorly coordinated and this accounts for the weakness in German war production in the years 1939-45. How far do you agree with this view?

﻿?The handling of the economy was poorly coordinated and this accounts for the weakness in German war production in the years 1939-45.? How far do you agree with this view? The Second World War placed enormous strains on the German economy and labour force. Between 1939 and 1941, German military expenditure doubled and by 1941, 55 per cent of the workforce was involved in war-related projects. Despite these efforts, German productivity was disappointing and below that of their enemies. The chaotic organisation and poor co-ordination of the economy undoubtedly hindered the war effort during the years however; it seems inaccurate to argue that this solely accounts for the weakness in German war production. What proved more critical was the lack of raw materials and labour and this was a result of both the shortcomings of Goering (who wasted resources producing ersatz goods when cheaper imports were available) as well as the ideological contradictions of the regime (which meant that women were not initially conscripted and that six million Jews were exempt from contributing to the war effort.) To begin, it is true that the mobilisation of the German economy was marred by inefficiency and poor co-ordination. The pressures resulting from the premature outbreak of war created problems, since many of the major projects were not due to be ready until 1942-3. Further, the regime was unable to establish a clear and authoritative control over the economy. ...read more.

the arms factories, making effective use of concentration camp prisoners as well as preventing skilled workers from being lost to military conscription. Thus, it can be seen that in terms of co-ordination, Speer made a significant improvement in both productivity and this was supported by a leap in military expenditure. It can therefore be argued that it was down to other factors such as the Allied bombing raids, the shortage of raw materials and Hitler?s ideological contradictions that proved more critical to the German war effort. . Crucially, it is argued that Speer?s initiatives were too late and that despite his economic success, Germany probably had the capacity to produce more and could have achieved a level of output close to that of the USSR or the USA. Furthermore, Speer was not always able to counter the power of the Gauleiters at a local level and the SS remained a law unto themselves, especially in the conquered lands. Crucially, the effects of the Allied bombings from 1943 had a detrimental effect on the economy. Germany peaked in the production of weapons in the summer of 1944 due to Speer?s initiatives but the German armed forces could not fully benefit from this because of the effect of Allied air raids. The bombing prevented Germany from further increasing its levels of arms production and caused industrial destruction and the breakdown in communications. ...read more.

The demands of motherhood limited the pool of labour and as many women were already employed in agriculture (and were needed to remain in this sector due to male conscription) there were further limitations on fully exploiting the female labour market. Subsequently, the shortage of labour remained throughout the war and this was not something that even Speer could rectify. In conclusion, it is evident that the German economy did not expand sufficiently to meet the demands of ?total war? and thus war production was weak during the years 1939-45. It is true that the handling of the economy was poorly co-ordinated, particularly during 1939-42, as the chaotic nature of the Nazi state meant that there were a number of rival agencies. However, whilst from 1942 the regime underwent a rationalisation process, fronted by Speer, the underlying problems remained thus limiting the possibilities for economic expansionism. Thus, the fundamental problem which accounts for the weakness in German war production in the years 1939-45 was the both the lack of raw materials and labour. This problem was exacerbated by the fact that conquest did not make up the shortfall in these two essential components of any economy. Finally, there was a conflict between the impulses of an ideologically destructive regime and one in need of economic growth. It is the greatest irony of the Second World War that whilst the Nazi regime scoured Europe looking for labour, it was in the process of murdering six million Jews. ...read more.